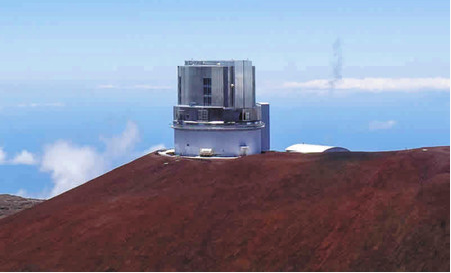 The National Astronomical Observatory of Japan (NAOJ; Mitaka City, Tokyo; Director General Saku Tsuneta) is considering shifting its policy on using a Defense Ministry program that financially supports fundamental research applicable to military technologies, the Tokyo Shimbun has learned. Three years ago, the NAOJ decided not to apply to the program, and some NAOJ researchers oppose the shift, saying, “It is a sudden change and an adequate explanation has not been given.” The NAOJ owns the Subaru Telescope and other advanced facilities and is the central player in astronomy in Japan. If it decides to shift its policy, it will have a significant impact on Japan’s academic community.

The program in question is the “National Security Technology Research Promotion program.” The Defense Ministry started the program in fiscal 2015 to promote research that would lead to the development of defense equipment and weapons. The ministry included “technologies for observing objects” as one of its public recruitment themes last fiscal year and specifically named the NAOJ’s Subaru Telescope as an example.

In 2016, the NAOJ’s researchers voiced their concern about the program, saying, “The government intervenes too much in the research.” As a result, the NAOJ decided at a faculty meeting that same year that “the NAOJ will not apply to the National Security Technology Research Promotion program or equivalent programs.”

At a faculty meeting in July this year, however, the NAOJ’s executive division submitted a proposal to revise the policy. The proposed revision was to delete the language of “not applying to the program or equivalent programs” from the policy and add new language saying that the NAOJ can apply to the program if it is allowed to freely disclose its research results. The statement that “the NAOJ will not conduct research directly aimed at military use” was retained.

According to records related to the faculty meeting, the executive division argued during the meeting that the Defense Ministry’s program offers the same degree of freedom as the government’s other research grants. The meeting was divided on the matter, and no conclusion was reached.

In response, the employees’ union and other groups requested the executive division to carefully discuss the matter and submitted written opinions calling for the withdrawal of the proposal to revise the policy. The NAOJ has yet to reach a conclusion.

Regarding the Defense Ministry’s program, the Science Council of Japan (SCJ), which is composed of scientists in Japan, issued a statement in 2017 that based on the lessons learned from past cooperation in war, “the SCJ will not conduct military-related research.” This was in line with its past statements. Kyoto University and Nagoya University have also set a policy of prohibiting military-related research. In March this year, the Astronomical Society of Japan (ASJ) issued a statement, saying, “The ASJ will not conduct research that leads to threatening peace and security.”

Regarding the reason for submitting the proposal to revise the policy, Director General Tsuneta referred to a tight budget and explained: “Cost-cutting has limitations. Without using a more diverse range of external funds, we cannot conduct research that will lead to next-generation science. We want to discuss the (Defense Ministry’s) program as an option.”