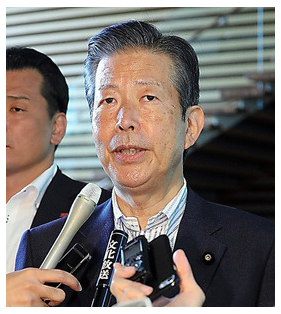 Natsuo Yamaguchi marked the 10th anniversary of his tenure as Komeito leader on Sept. 8. He has stabilized the foundation of the coalition government by managing the party in step with the Liberal Democratic Party, including when he was an opposition party leader. Meanwhile, as the head of a “party for peace,” he continues to struggle to keep an appropriate distance from the hawkish Prime Minister Shinzo Abe. The party has been losing votes in the proportional-representation constituencies in recent national elections, posing a challenge for Yamaguchi in restoring the party’s strength.

Yamaguchi reflected on the past decade after meeting with Abe at the Prime Minister’s Office on Sept. 6. “We have taken great pains to address various issues related to maintaining the government,” he said. “We’ve been able to do this because the government and the ruling parties have made efforts in an integrated manner.”

Yamaguchi took the helm of Komeito after then-party leader Akihiro Ota lost his seat in the Lower House election in 2009, which forced the LDP and Komeito out of power. Since the LDP and Komeito regained power at the end of 2012, he has accomplished many things, including the introduction of a reduced tax rate when the consumption tax was raised, as a part of the ruling bloc.

On the other hand, he provoked a backlash from Soka Gakkai, Komeito’s support base, by teaming up with the LDP to force through a national security bill and a bill to implement integrated resorts (IR) that legalizes casinos despite strong objections from the religious group. In recent years, the party has been losing votes in the proportional-representation constituencies in national elections. The number of votes it acquired in the latest Upper House election fell by more than one million from the previous election held three years ago.

Abe wants to promote discussions on constitutional amendment after autumn this year. Yamaguchi maintains a cautious stance about the LDP’s proposal to spell out the legal status of the Self-Defense Forces in Article 9 of the Constitution. As such, Yamaguchi is likely to have a hard time dealing with the issue.

Yamaguchi is the longest-serving leader since Komeito was re-established in 1998. Keiichi Ishii, who is expected to step down from the post of Minister of Land, Infrastructure, Transport and Tourism in the upcoming cabinet reshuffle, has been recommended by some as Yamaguchi’s successor. Nurturing a leader for the next generation is another urgent task for Yamaguchi.