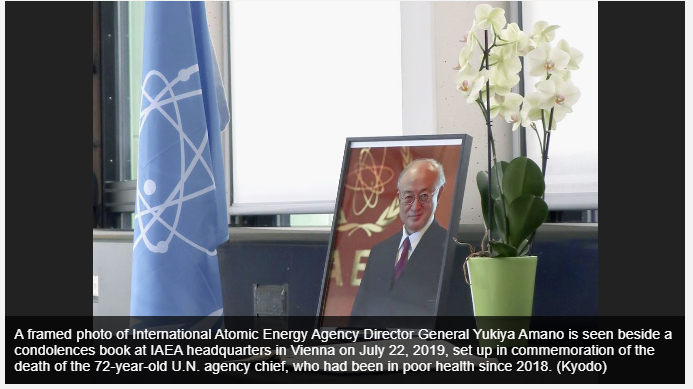 VIENNA — The International Atomic Energy Agency plans to name its new facilities at the existing laboratories near Vienna after former chief Yukiya Amano, some members of the IAEA board of governors said Monday.

The Japanese diplomat died in July in the middle of his third four-year term as IAEA chief. The new facilities at the laboratories in Seibersdorf, Austria, will focus on ways to apply nuclear technology to such fields as agriculture, and will start operating next spring.

The naming plan is expected to be formally adopted at the IAEA’s annual general meeting from Sept. 16. The new addition to the laboratories in Seibersdorf will “carry his name to reflect his distinguished service to the agency and outstanding personality,” the German mission to the Vienna-based IAEA tweeted.

In Tokyo, Foreign Minister Taro Kono said Tuesday that the Japanese government will contribute 1 million euros ($1.1 million) to the IAEA laboratories to honor the achievements of Amano.

“We hope that the will and achievements of Amano, who proposed ‘Atoms for Peace and Development,’ will be inherited for a long time,” Kono told a press conference.

The money will be used to renovate facilities working to apply nuclear technology, including irradiation, to pest control and other agricultural issues, the government said.

The late IAEA director general added the word “development” to the agency’s objective, which was then revised to “Atoms for Peace and Development,” and worked to support developing countries.

Renovations of existing laboratories as well as the construction of the new ones are part of projects to meet the objective, according to the U.N nuclear watchdog.

Amano, who became the first Asian to be elected to the post in 2009, worked to address the Iran nuclear issue as well as to beef up the watchdog’s oversight of North Korea’s nuclear program.

He also sought to improve the safety of nuclear power plants following the 2011 Fukushima Daiichi nuclear disaster in northeastern Japan.