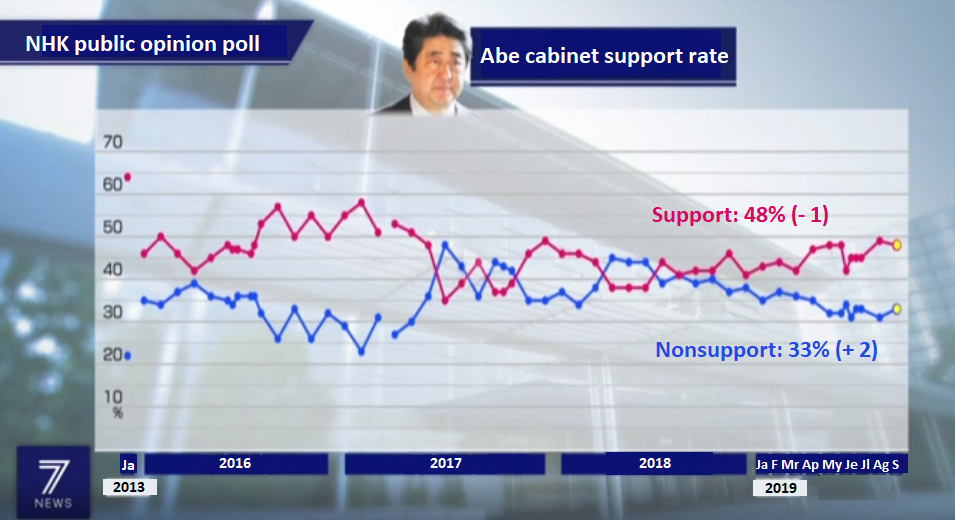 According to the NHK public opinion survey, 48% of pollees support the Abe cabinet, down 1 percentage point from the poll conducted last month. Those saying they do not support the cabinet increased by 2 points to 33%.

NHK conducted a nationwide survey over the three-day period of Sept. 6–8 on a computer-aided random digit dialing (RDD) basis and targeted men and women aged 18 or over with calls placed to landline and mobile phone numbers. Valid responses were received from 1,216 of the 2,368 people polled. The valid response rate was 51%.

Asked why they do not support the cabinet, 33% said “because nothing can be expected of its policy measures” and 31% said “because the prime minister is untrustworthy.”

To maintain the level of pension benefits pensioners receive in the future, the government is considering expanding the range of part-timers and other shortened-hour workers included in corporate pension schemes. Some 57% of respondents said they are “in favor” of this while 23% said they are not.

The Prime Minister will announce his new cabinet on Sept. 11.

Pollees were asked which policies they think the new cabinet should place priority on going forward and then were read aloud six options. Some 28% said the cabinet should place priority on “social security,” making it the most frequently given response.  This was followed by “economic policies” at 20%, “fiscal reconstruction” at 15%, and “diplomacy and security” at 11%, “rectification of disparities” at 11%, and “constitutional amendment” at 5%.

The Constitutional Democratic Party of Japan and the Democratic Party for the People have agreed to merge their parliamentary groups in both the Upper and Lower Houses in order to serve as a rival to the Abe administration. Some 19% said they “approve” of the move, while 27% said they do not, and 45% said they “can’t say either way.”