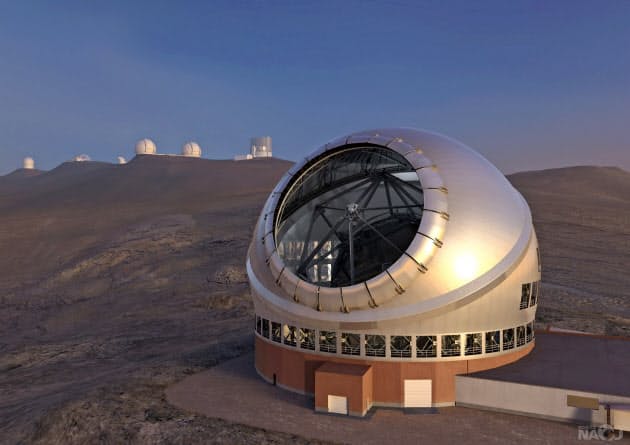 Telescopes are becoming larger with technological innovation. Once a ultra-large telescope is constructed, it is expected to achieve epoch-making outcomes such as direct observation of a “second earth” outside the solar system. Five countries, including Japan and the U.S., plan to construct the “Thirty Meter Telescope (TMT),” which will be one of the world’s largest telescopes, on Hawaii Island, but the outlook for the project is unclear. Plans to construct two similar next-generation telescopes are also underway in Chile.

The TMT will be a super-large telescope featuring a main mirror with a diameter of 30 meters. It will be larger than America’s Keck Telescope (diameter: 10 meter) and Japan’s Subaru Telescope (diameter: 8.2 meters), which are currently among the world’s largest. The TMT’s light-gathering power will be 10 times higher and its resolution 3 times higher, which represent significant improvements.

A total of five countries jointly plan to construct the TMT, including the U.S. (University of California and the California Institute of Technology), Japan (National Astronomical Observatory of Japan), Canada, India, and China. The TMT is to be constructed at a site 4,012 meters above sea level slightly below the summit of Mauna Kea, a dormant volcano on the island of Hawaii. Since the air is thin and the skies are often clear there, it is an optimal site for astronomic observation. The Subaru and Keck telescopes are also installed on mountaintops.

Since Galileo Galilei used a telescope for astronomic observation for the first time about 400 years ago, astronomical telescopes have gradually grown in size as technology has advanced.

At the time of its completion, the Subaru Telescope was the world’s largest telescope with a monolithic mirror. To prevent distortion caused by the mirror’s weight, a system controlling the 261 pillars that support the mirror was introduced. In contrast, the Keck Telescope uses a “segmented mirror,” where multiple mirrors are made to function like a single monolithic mirror.

The National Astronomical Observatory of Japan, which operates the Subaru Telescope, and the University of California, which operates the Keck Telescope, will join hands in the TMT project. “We are bringing together the highest level of leading-edge core technologies,” said TMT Project Office Director Tomonori Usuda of the National Astronomical Observatory of Japan. The 30-meter diameter will be achieved by combining 492 small hexagonal mirrors each with a 1.44-meter diagonal line. The mirror will be made by combining a total of 82 mirrors which each have a slightly different shapes depending on its placement in the mirror. Japan is tasked with manufacturing the mirror and polishing one-third of it.

Another key technology in the TMT is “adaptive optics,” which corrects for incoming wave front distortions. The atmosphere is uneven depending on differences in water vapor amount and its temperature. This distorts light coming into a telescope from outer space through the atmosphere. Clear images can be obtained from observation in space as in the case of the Hubble Space Telescope, but a large telescope is extremely expensive.

The TMT and the ultra-large telescopes under construction in Chile are expected to go into full-scale operation as early as around 2030. One of their key purposes is the discovery of an “exoplanet.” Researchers will try to directly observe, with high resolution, planets that orbit fixed stars outside the solar system. If they can find water, oxygen, and methane there, it could be a “second earth” where extraterrestrial life may exist.

Exoplanets have only been detected indirectly to date. “It would be a historic achievement,” said TMT Project Office Deputy Director Ikuru Iwata of the National Astronomical Observatory of Japan. The TMT is also expected to contribute to the observation of the first star and galaxy born in space after the Big Bang and the elucidation of the properties of “dark energy,” an unknown form of energy.

Cooperation with the two telescopes in Chile is indispensable

Five countries, including Japan and the U.S., plan to construct the super-large telescope “TMT” on Hawaii Island, but the prospects for the project remain uncertain. The telescope is scheduled to be completed in fiscal 2027 under the current plan, but delays will be unavoidable. With prolonged construction, the total costs will likely increase from the original $1.8 billion (about 190 billion yen).

Construction of the TMT started in 2014 but was temporarily suspended on account of opposition from residents who believe that the summit of Mauna Kea – the construction site – is sacred. In 2015, the Supreme Court of the State of Hawaii invalidated the construction permit, citing procedural deficiencies.

In the meantime, the construction of similar ultra-large telescopes is underway in Chile. One is “E-ELT (diameter: 39 meters) of the European Southern Observatory, and the other is “GMT” (diameter: 24.5 meters) of the U.S. Carnegie Observatories. The two telescopes are expected to be completed as early as the late 2020s.

The TMT will be located in the Northern Hemisphere and two others in the Southern Hemisphere. Optimal targets for observation differ between the two locations. The progress of the TMT construction is the focus of attention as the telescope is need to complement the work of the two in Chile.