TOKYO — Prime Minister Shinzo Abe’s new cabinet received a measured endorsement from the public, according to the latest Nikkei-TV Tokyo spot survey, with 45% approving of the reshuffling and 30% dissatisfied.

The poll, conducted after Abe unveiled the roster Wednesday, also asked who was the most appropriate choice for the next prime minister. Abe is slated to step down from the post in September 2021 when his term as leader of the ruling Liberal Democratic Party ends, unless the party rules are changed. 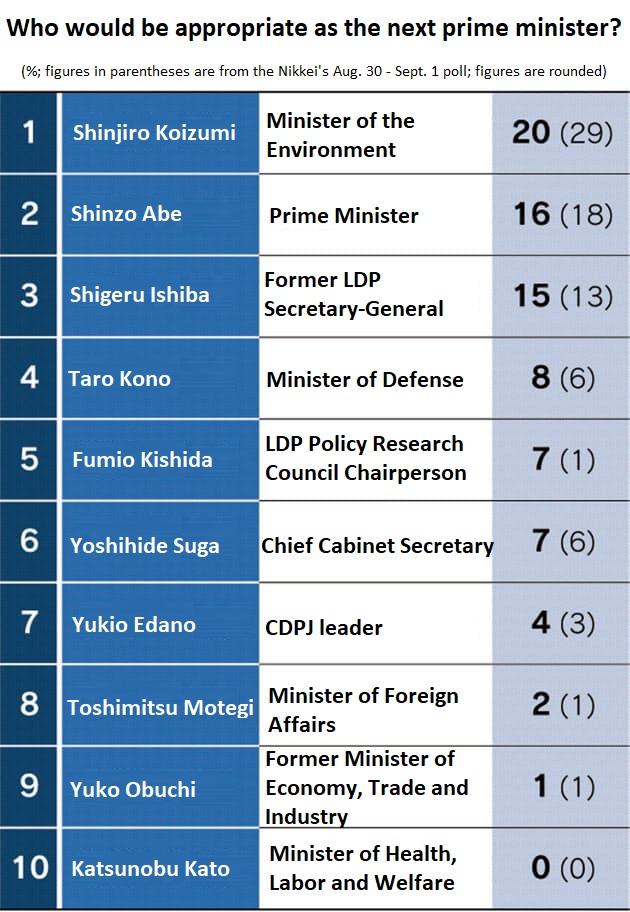 Just-installed Environment Minister Shinjiro Koizumi, a son of former Prime Minister Junichiro Koizumi and at age 38 the youngest man to join the cabinet in postwar Japan, led a pack of 10 offered in the survey at 20%.

This was down 9 points from the last poll, taken two weeks ago. He likely lost ground to other prominent officials who got a lift from the leadership reshuffle, such as LDP policy chief Fumio Kishida.

Overall cabinet approval came to 59% and disapproval to 33%, both largely unchanged from the last poll. Approval had shot up 6 points back then over a tightening of Japanese controls on exports to South Korea.

Of those who backed Abe’s cabinet, 49% cited its stability and 28% cited its global aptitude.

Abe wants to hold a referendum before his term as LDP leader expires in September 2021 on amending Japan’s constitution. Support for this plan was up 6 points compared with July to 58%, with roughly 70% of respondents aged 18 to 39 behind the idea. Opposition held steady at 32%.

Nikkei Research surveyed people 18 and older via telephone Wednesday and Thursday, receiving 934 responses. The response rate came to 44.6%. (JMH translated and added the line graph on page 1 and the chart on page 4 of the Sept. 13, 2019 morning edition of the Nikkei.)