TOKYO — Tensions between Iran and the U.S. in the Strait of Hormuz are threatening to spill over beyond energy fields to materials such as aluminum and chemicals, with broad implications for countries reliant on the region.

That is because Middle East countries have been steadily reducing their dependence on petroleum in the face of shale oil development in the U.S. and weak crude oil prices.

To assess the potential effect of a worsening diplomatic situation, Nikkei calculated the percentages of global materials exports from seven countries near the Strait of Hormuz, based on data provided by the International Trade Centre.

The region’s share of petrochemicals has risen to 30% of global exports, and aluminum is now at 16%. Many Japanese companies, in particular, have become more dependent on Middle East-produced materials, and a wide range of non-energy industries could be adversely affected if the antagonism between the U.S. and Iran intensifies.

Several countries in the Middle East, especially in the Persian Gulf, are major producers of petrochemicals used to make plastics, such as ether and ethylene, as well as ammonia, a raw material for chemical fertilizers. Products produced in the region accounted for 20-30% of global exports in 2018, with their shares increasing between twice and five times over the past 10 years. The share of Middle East exports of nonferrous metals, including copper wire and aluminum bullion, grew from almost zero in 2008 to about 15% last year.

The shift away from crude oil has been focused on materials with higher added value, such as chemicals and nonferrous metals.

Middle Eastern countries have benefited from cheap electricity, generated by abundant energy resources, and introduced cutting-edge equipment and facilities through active investment programs. They are now making high-quality products at low prices and have expanded their export markets to China, Japan, Southeast Asia and North and South America. As a result, the proportion that the oil sector contributes to gross domestic product has fallen to about 40% in Saudi Arabia and about 30% in the United Arab Emirates. Members of the Association of Southeast Asian Nations are also heavily dependent on Middle Eastern ethylene. For Singapore, Saudi Arabia accounted for 75% of the value of its ethylene imports in 2018. More than half Malaysia’s ethylene imports also come from the Middle East. For ammonia, five countries near the Strait of Hormuz are among the 10 largest suppliers for India, accounting for a combined 70-80% of its ammonia imports. For other materials, including ether and copper wire, Asian countries are among the largest customers for the Middle East.

The ongoing tensions in the Strait of Hormuz, a vital marine transport route that sits at the mouth of the Persian Gulf, are thus casting a long shadow over the supply chains of a wide range of products.

The current crisis started with attacks against two tankers in June. One was owned by a Japanese company and was carrying methanol, which was produced locally by a joint venture of Mitsubishi Gas Chemical and a Saudi company. Mitsubishi Chemical Holdings and Sumitomo Chemical have also invested in plant and equipment in the Middle East in recent years. 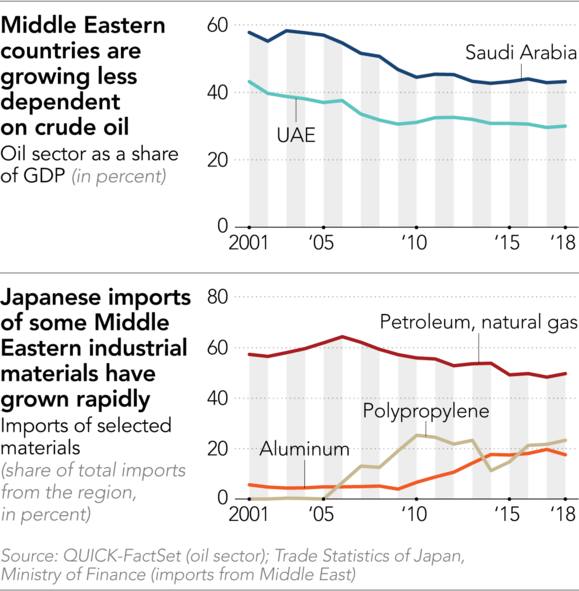 However, it is aluminum bullion, which requires a large amount of electricity to produce, where Japan is increasingly dependent on the Middle East. According to Japanese trade statistics, the percentage of aluminum bullion, including alloys, that it imported from the region grew threefold over a decade to about 17% in 2018.

“The composition of the metal from the Middle East is stable because of new production facilities there,” said an executive at a Japanese metal rolling company. Middle Eastern aluminum is becoming more important in Japan as a material for use in cars and buildings.

The changing situation in the Middle East is forcing Japanese manufacturers to respond. A major producer of flat-rolled aluminum products that relies on the Middle East for 30% of the metal is “looking for other suppliers to secure stable supply,” said an official. It is difficult to find alternative suppliers of quality products and it would take about a year to confirm the quality of the metal, the official added.

Meanwhile, marine transportation costs have risen. The rates of insurance premiums for vessels have increased to about 20 times those before the tanker attacks in June. Major Japanese shipping companies, such as Nippon Yusen and Mitsui O.S.K. Lines, plan to ask cargo owners to bear the burden of the increase in insurance premiums.

As Middle Eastern countries increase their presence in fields beyond energy resources, the influence of the Hormuz crisis could spread not only to materials industries, but also to manufacturers using aluminum and chemicals — and from there to consumers.

Leaders of the U.S. and Iran could hold talks in New York on the sidelines of the United Nations General Assembly, which opens Tuesday and runs until the end of the month, but the situation remains uncertain.