Immigration facilities have been dealing with a spate of hunger strikes by foreigners who are to be deported for being in the country illegally and other reasons.

The detainees’ goal appears to be temporary release for poor health that would allow them to live outside the facility.

Some detainees have recovered while on temporary release, then returned to detention facilities and resumed their hunger strikes.

Prolonged periods of detention lies behind this issue.

Immigration authorities are struggling to deal with detainees on hunger strikes.

“A hunger strike is the last resort. I want to spend time with my family before I die,” an Iranian man in his 60s who has been detained for about four years said during an interview in a visiting room.

The man began his hunger strike on July 20. His weight has fallen from 83 kilograms to 75 kilograms. His cheeks were hollow and he said he has to get around using a wheelchair because of his poor health.

The man came to Japan in the early 1990s, according to a group that assists detainees. He married a Japanese woman and has a son, but is awaiting deportation after being convicted of a drug-related crime. He has not been granted temporary release even once since being detained.

Sources said that as of Sept. 10, about 50 detainees were on hunger strikes at four of the 17 immigration facilities nationwide.

Several inmates in Ushiku began hunger strikes around May. At the peak in late July, about 70 people were on hunger strikes, but the number has now declined to about 20 people.

About 20 detainees are also on hunger strikes at the Omura Immigration Center in Omura, Nagasaki Prefecture. The facility holds about 100 people.

A Nigerian man in his 40s died at this facility in June after exhibiting what are thought to have been symptoms of cibophobia (fear of eating) after a hunger strike.

No solution in sight

There have been hunger strikes by detainees in the past, but these were mostly done to protest poor treatment at the facilities and were settled over a period of time. The recent hunger strikes are of a different sort.

The Immigration Services Agency grants temporary release to detainees whose health deteriorates to a point that makes it difficult to keep them at the facilities.

This release comes with restrictions, such as prohibitions against working and limitations on their scope of activities.

“Detainees are going on hunger strike one after another now because they think if they do they’ll get temporary release. We don’t see any prospect of resolving the situation,” a senior agency official said.

Since May, about 30 people have been temporarily released from immigration facilities around the country due to poor health caused by hunger strikes.

These releases are usually for two weeks, and if their physical condition improves they are detained again. Some detainees have resumed their hunger strikes after reentering the facility.

Extended stays in detention are why so many detainees are conducting hunger strikes.

As of the end of last year, 1,246 people were being detained at immigration facilities. Of these, 491 people had been detained for at least one year.

The facilities are intended to be temporary, with detainees being returned to their countries as soon as they accept deportation. However, detention can become prolonged if a person refuses deportation. In some cases the home country refuses to accept them.

Foreigners who have violated the Immigration Control and Refugee Recognition Law, such as for illegal stays or entry, can be granted special residence permits by the Justice Ministry that allow them to stay for humanitarian reasons if they have family in Japan. Last year 1,371 people were granted such permits.

“Many long-term detainees have families in Japan, are unable to return to their countries due to conflict or other reasons, or have other circumstances. People who have lived in Japan for a long time and are thought to only be able to live here should receive more flexible dispensation, including provisional release,” said Matsuo Tamaki, a sociology professor at Utsunomiya University who has been involved in issues surrounding the detention of foreigners.

However, some long-term detainees have been involved in serious crimes such as robberies and drug-related incidents.

Foreigners on temporary release have been involved in cases involving drugs, bodily harm and theft. Last year, 108 such people were arrested.

“We pay attention to humanitarian concerns as much as possible, but it’s difficult to grant temporary release or special residence permits to foreigners who have committed crimes that cause serious damage, such as drug trafficking,” a senior agency official said. 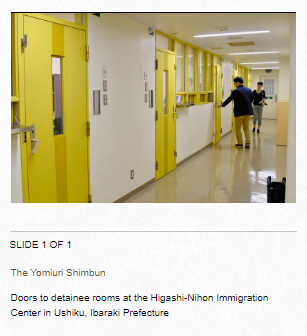