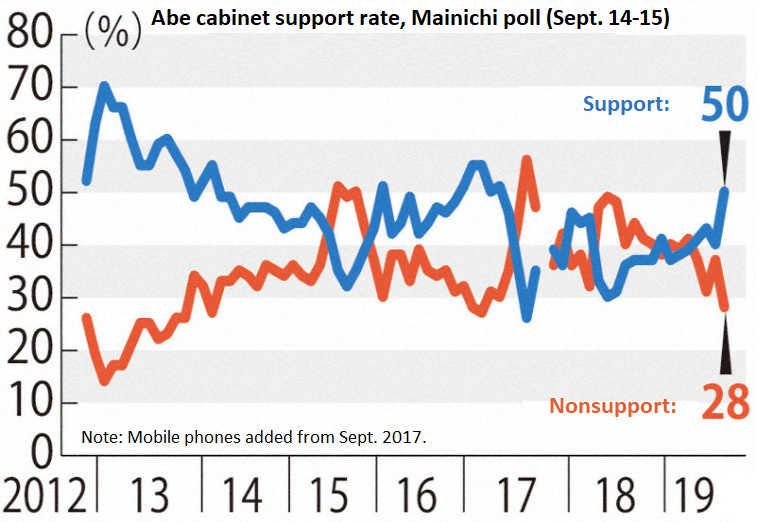 TOKYO — The approval rating for the Cabinet of Prime Minister Shinzo Abe has risen to 50%, possibly due to the appointment of popular legislator Shinjiro Koizumi as environment minister, a nationwide Mainichi Shimbun survey has shown.

Support for the Cabinet in the latest survey, conducted on Sept. 14 and 15 following the Cabinet reshuffle on Sept. 11, is up 10 points from the previous survey in June this year.

The percentage of those who did not support the Abe Cabinet decreased 9 points from the previous poll to 28%.

The public was divided over the reappointment of Deputy Prime Minister and Finance Minister Taro Aso, Chief Cabinet Secretary Yoshihide Suga and ruling Liberal Democratic Party (LDP) Secretary-General Toshihiro Nikai as the core of the Abe administration. Of the pollees, 42% replied they were in favor of these reappointments while 45% said they were against them.

Overall, 64% of the respondents said they approved of the appointment of Koizumi as environment minister, far above 23% who answered they did not.

Even among those who did not support any particular political party, 59% gave a positive evaluation of the appointment of Koizumi.

Of those who support the Abe Cabinet, 71% said the number of female Cabinet members should be increased.

By political party, the LDP scored a support rating of 34%, compared with 8% for the Constitutional Democratic Party of Japan, 5% for Nippon Ishin (Japan Innovation Party), 5% for the LDP’s coalition partner Komeito, 2% for the Japanese Communist Party and 2% for Reiwa Shinsengumi. Some 36% replied they did not back any particular political party.

(Japanese original by Yuri Hirabayashi, Poll Office) (JMH translated and added the line graph on page 1 of the Sept. 16, 2019 edition of the Mainichi Shimbun.)