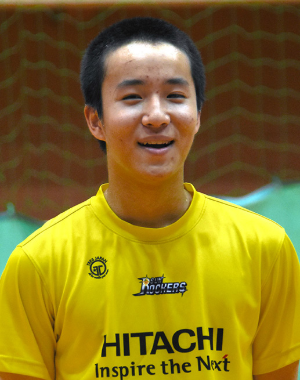 A 15-year-old who developed his basketball skills at a playground with no nets has taken a big step toward fulfilling his dream of playing in the National Basketball Association.

Masaya Takahashi this summer entered a Florida high school that is known for churning out professional basketball talent.

The 175-centimeter-tall guard, who has had little experience playing on school teams, hopes to follow Rui Hachimura and Yuta Watanabe, two Japanese players who have joined the NBA.

PRACTICING WITH NO NETS

When he was in the fourth grade, he happened to watch an NBA game on TV and decided then that his goal was to eventually play on an NBA court.

Takahashi scoured the Internet to find the routes players took to reach the NBA. He learned that most of them played at U.S. universities in Division 1 of the National Collegiate Athletic Association (NCAA).

Takahashi wanted to go to the United States as soon as possible. He told his parents that he hoped to study there “from junior high school,” but his father persuaded him to go “from high school” at the earliest.

The boy was so serious about playing and studying abroad that it became the goal of the entire Takahashi family.

However, when he enrolled at a local junior high school and joined the basketball team, he found the other players lacked his seriousness for the game. They often played dodgeball or tag during practices.

He quit the team within a year.

Feeling that he had to practice by himself, he went to a nearby park at 5 a.m. every day.

The park had no hoops, so he could not practice his shots. Instead, he worked on his dribbling, footwork and other non-shooting skills.

In the summer, he had to fend off mosquitos. In winter, the skin on his hands cracked in the dry weather.

By watching NBA players on YouTube, Takahashi jotted down his practice routines for the park.

FROM YOUTH TITLE TO U.S.

But he knew he needed to play in organized games.

Through the Internet and his friends’ networks, Takahashi ended up practicing with adults.

At the end of his second year of junior high school, he joined a team for boys up to 15 years old that was newly established by Sunrockers Shibuya, a professional Japanese basketball team.

Ryota Matsuoka, manager of the youth team, said he immediately recognized Takahashi’s skills when he caught a glimpse of his play.

“He plays so well. I was just surprised, thinking, ‘Who is that guy?’” Matsuoka said.

Matsuoka described Takahashi as a “modern” guard who create chances by himself and can nail his shots, despite his practices in a rimless park.

Takahashi became the go-to player for the team. In a U-15 league tournament held in autumn last year in Tokyo, he led the Sunrockers Shibuya to the title.

In a close final, Takahashi scored a game-high 21 points, including five three-pointers.

Team members and staff knew about Takahashi’s hopes to study in the United States, so they helped him out by sending videos of his highlights to several U.S. high schools.

Takahashi was then accepted at Montverde Academy in Florida.

Last season, the Montverde Academy basketball team ranked fourth among all high schools in the country, according to the USA Today newspaper.

Montverde Academy alumni include Ben Simmons, a star with the Philadelphia 76ers, and D’Angelo Russell, now with the Golden State Warriors.

Hachimura was picked ninth, by the Washington Wizards, in the same draft.

Although Takahashi did not receive a scholarship from Montverde Academy, the school’s vice principal came to Japan to greet him in person.

Before he left Japan, Takahashi said: “I look forward to competing against people not only on my team but also on other teams.”

According to Matsuoka, basketball players at Montverde Academy are ranked based on their skill level.

Takahashi’s father said his son seems to have settled at a rank of six out of nine in tests that had continued since the end of August.

For years, Takahashi had searched for suitable places to practice and play. Now, he says the most enjoyable thing in the United States is that he can “use the gymnasium at any time.”