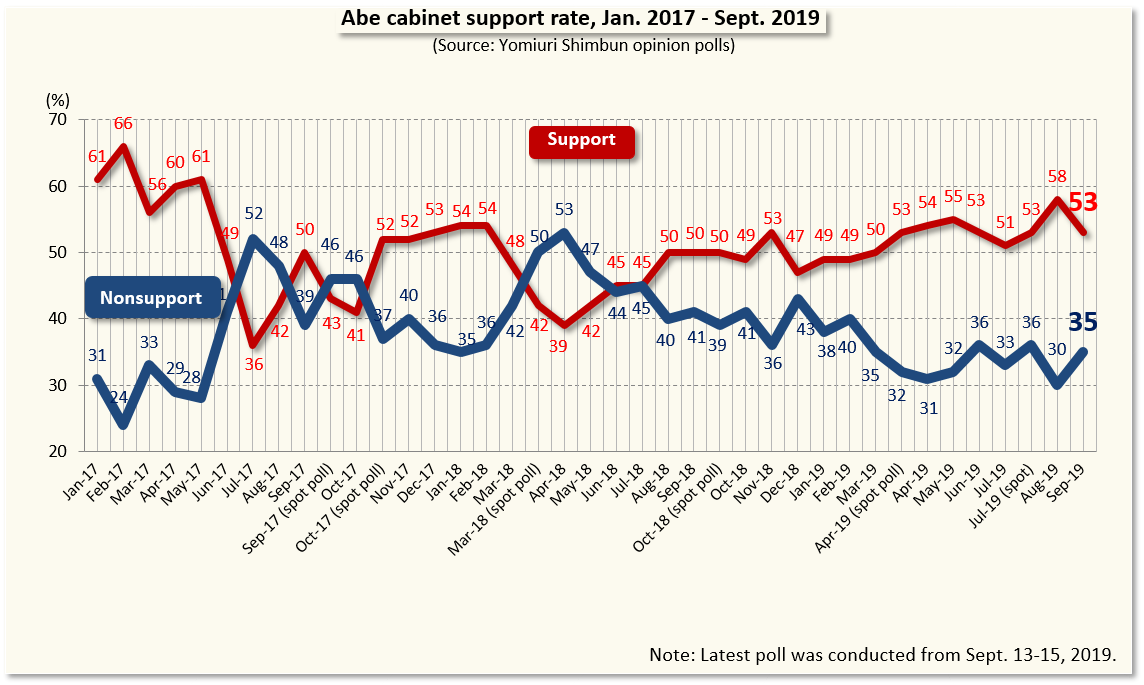 Prime Minister Shinzo Abe’s reshuffling of his Cabinet was met with approval by 46 percent of respondents, against 34 percent who disapproved, according to a nationwide opinion poll conducted by The Yomiuri Shimbun.

The telephone survey using the random digit dialing method was conducted from Friday through Sunday. The 1,074 voting-age respondents comprised 543 fixed-line phone users from 899 households confirmed to have at least one eligible voter and 531 out of 1,247 mobile phone users who answered their phone.

The appointments of Shinjiro Koizumi as environment minister and Seiko Hashimoto as Tokyo Olympic and Paralympic Games minister were met with 69 percent approval. Meanwhile, 66 percent approved of Chief Cabinet Secretary Yoshihide Suga remaining in his post, but 55 percent disapproved of Deputy Prime Minister and Finance Minister Taro Aso retaining his posts, against only 33 percent who approved.

The percentage of respondents who said they were “looking forward to” active discussions in Diet committees on the Constitution over amending the charter was 56 percent, down from 66 percent in a survey conducted from July 22 to 23.

As the consumption tax rate is set to be raised from 8 percent to 10 percent next month, those who “intend to reduce” household expenditures reached 45 percent, compared to 47 percent who “do not intend to.” When asked the same question just before the consumption tax rate was raised from 5 percent to 8 percent in April 2014, 55 percent intended to reduce household expenditures and 40 percent did not.

As for the introduction of a reduced consumption tax rate, 60 percent approved and 33 percent disapproved.