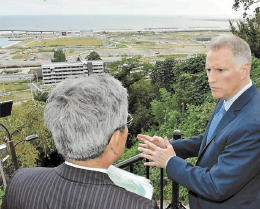 The Sunday edition of Kahoku Shimpo, a local paper based in Sendai, Miyagi Prefecture, reported on Chargé d’Affaires ad interim Young’s visit on Saturday to Ishinomaki, a city in Miyagi that was severely affected by the 2011 Great East Japan Earthquake and tsunami. Ishinomaki Mayor Kameyama told Chargé Young about the progress made in reconstructing the region and expressed gratitude for the support extended by nations and people around the world. The paper wrote that Chargé Young told the press afterward that he has great respect for the local citizens who are trying to pass down the lessons learned from the disaster to the next generation.