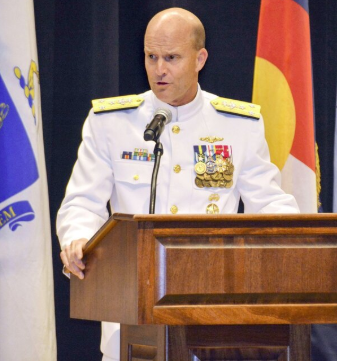 A change of command ceremony for the U.S. Navy’s 7th Fleet was held at the Yokosuka base (Yokosuka City) on Sept. 12. Vice Adm. Phillip Sawyer was replaced by Vice Adm. William Merz, who became the 52nd commander.

According to the U.S. Navy, during the ceremony Vice Adm. Merz stressed that he will further promote peace and stability in the region. Vice Adm. Sawyer emphasized the importance of cooperating with U.S. allies including Australia, Japan and South Korea to counter threats posed by North Korea and other countries.

Vice Adm. Merz was previously deputy chief of Naval Operations for Warfare Systems. He has served multiple tours aboard submarines.

Vice Adm. Sawyer assumed command in August 2017 following a series of incidents involving Aegis ships. His next assignment will be as deputy chief of Naval Operations for Operations, Plans and Strategy.