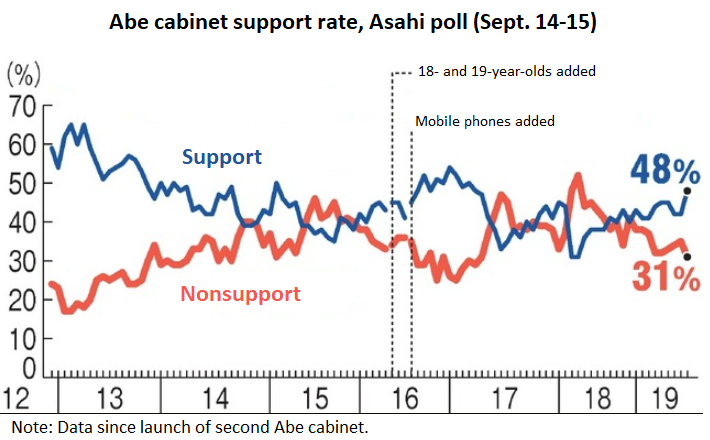 Sentiment for the Abe Cabinet is up, according to a nationwide survey, and it may be due in large part to a shakeup earlier in the month that saw a number of fresh faces, including rising star Shinjiro Koizumi, added to the lineup.

However, respondents voiced concern over increasingly strained relations with South Korea owing to ongoing rifts over trade and historical issues, the poll, conducted Sept. 14-15 by The Asahi Shimbun, showed.

Support for the Abe Cabinet climbed to 48 percent from 42 percent in late July when the last nationwide opinion poll was conducted.

The rate of nonsupport for the Cabinet dropped 4 percentage points to 31 percent.

Asked about the Cabinet lineup reshuffle, 35 percent of the respondents view it favorably, while 33 percent do not.

Among those not affiliated with any political party, the support rate rose from 18 percent to 23 percent.

Asked whether their impression of the Abe administration improved or worsened owing to Koizumi’s inauguration as environment minister, 31 percent of the respondents said it improved, while 6 percent said it worsened. A total of 60 percent said it was unchanged. 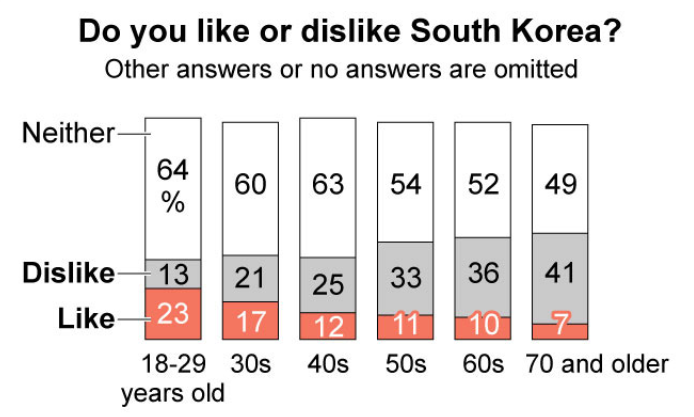 The survey also asked respondents about relations between Japan and South Korea.

Just 13 percent of the respondents said they have a favorable view toward South Korea, while 29 percent said they do not, and 56 percent answered neither.

The percentage of respondents who said they dislike South Korea increased in higher age brackets, with 41 percent of people aged 70 or older saying they do not have a favorable view of the country.

Among male respondents, the rate of those who have a favorable view of South Korea stood at about 20 percent for the 18-29 age group, higher than the rates for other age brackets.

In age brackets for people in their 50s and older, however, about 40 percent of male respondents said they dislike South Korea.

Among respondents who said they like South Korea, 39 percent replied that they favorably viewed the government’s policy, while the same rate said they did not.

Respondents were also asked how concerned they are about the effect of the worsened relations between Japan and South Korea on the economy and cultural exchanges.

The largest group, 42 percent, said “To some extent” and 14 percent said “Very much.”

By sex, 46 percent of male respondents said they are concerned, compared with 64 percent among women.

The poll also asked respondents who they think is suitable as the next president of the Liberal Democratic Party, replacing Prime Minister Shinzo Abe.

Koizumi was chosen by 22 percent; followed by Shigeru Ishiba with 18 percent; Taro Kono and Yoshihide Suga with 8 percent each; and Fumio Kishida with 6 percent.