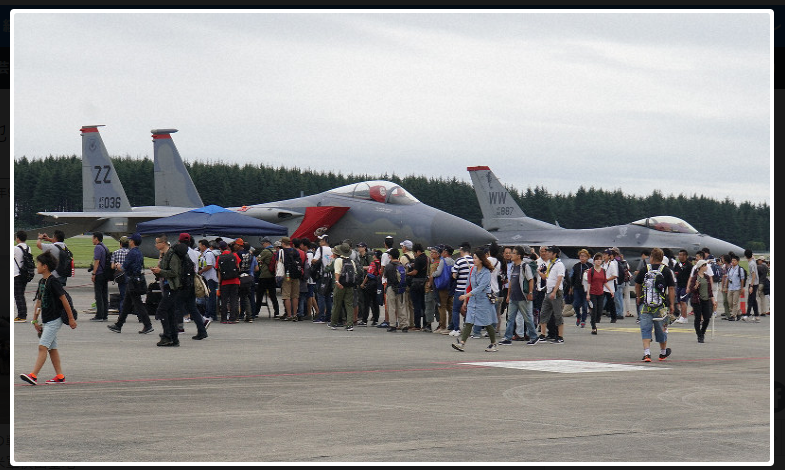 U.S. military aircraft are on display during the Japanese-American Friendship Festival at the U.S. military’s Yokota Air Base.

The Japanese-American Friendship Festival, during which the public is invited to visit the U.S. military’s Yokota Air Base (straddling Fussa and other municipalities in western Tokyo), began on Sept. 14. The event is aimed at deepening the understanding of the base among local residents and draws more than 100,000 visitors every year. It will continue on Sept. 15.

Col. Otis Jones of the base told the crowd at the opening ceremony, “I want to take this opportunity to solidify our relations with the communities near the base, which have been helping us a lot, and further strengthen friendship between Japan and the U.S.”  Some 42 airplanes, including the C-130J transport aircraft, the CV22 Osprey, and Air Self-Defense Force airplanes which are operating from the base, were lined up on the runway, with many aircraft fans taking photos of them. Visitors also formed a long queue to see inside the aircraft.

The RQ-4 Global Hawk was also on display as the large unmanned drone has been temporarily deployed to Yokota base since last month from Andersen Air Force Base in Guam in order to avoid a typhoon. Maj. John Wright [sp.?], who operates the airplane, underscored, “We’re flying the aircraft on the principle of safety first by cooperating with Japanese private flight control authorities.”