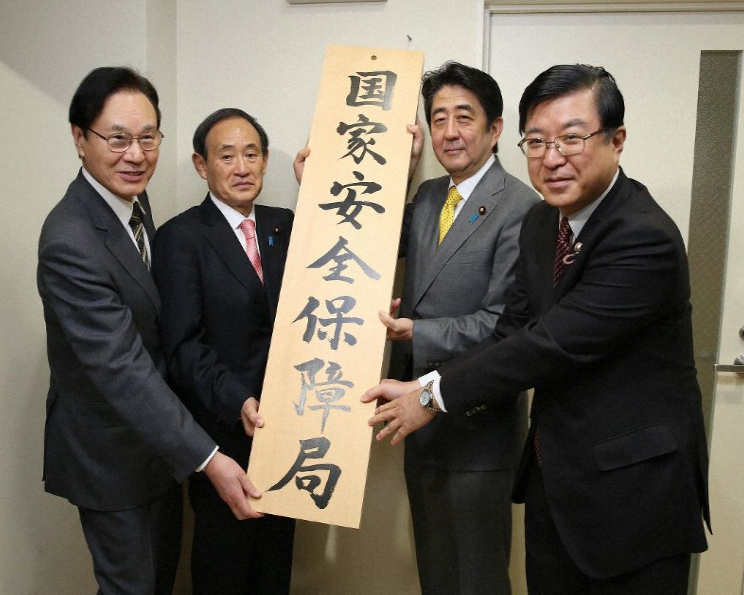 Prime Minister Shinzo Abe, second from right, and other officials hold a sign of the National Security Secretariat, in this Jan. 7, 2014 file photo taken in Tokyo’s Chiyoda Ward. (Pool photo)

TOKYO — The Japanese government is considering adding a new division tasked with economic policy to the National Security Secretariat (NSS) on top of its roles in coordinating foreign and security policy, amid intensifying global competition over economic hegemony as seen in the trade war between the United States and China.

The move comes as the government judged that Japan needs to develop a system encompassing the promotion of foreign, security and economic policies in an integrated manner as the recent economic leadership struggle overseas is closely related to national security.

The new division will be specialized in planning strategic economic policy measures and analyzing related information, with the apparent aim of catering to the promotion of economy-focused foreign policy at the initiative of the prime minister’s office.

The NSS was launched in 2014 as an organization to support the National Security Council (NSC), which is headed by Prime Minister Shinzo Abe and coordinates the government’s foreign and security policy. The NSS has six divisions under its arm including one for general overview and coordination and another for strategic planning, with roles ranging from analyzing foreign and security information gathered from the government ministries and agencies to devising policy measures.

According to sources close to the government, the establishment of a new economic division is expected to entail additional staffing to the NSS from the Ministry of Finance and the Ministry of Economy, Trade and Industry (METI).

The U.S.-China trade war has been dubbed the new Cold War, with both countries vying for supremacy in foreign and security spheres through tit-for-tat tariff hikes and other tactics. There are also moves to apply pressure on the other country’s industries for the apparent purpose of protecting a country’s own security, as seen in the expulsion of Chinese-made information communications devices from the U.S. market under the pretext of preventing espionage and cyberattack concerns.

Amid the circumstances, calls for focusing on “economic security” — a doctrine for ensuring national security through economic means such as energy, resources and food — have emerged in Japan, prompting a group of ruling Liberal Democratic Party legislators to propose the establishment of a council tasked with economic security in March this year.

However, the government is not heeding the proposal on the grounds that it “would be more effective to lay out a system for the NSC to exercise a leadership role in economic policy measures,” according to a senior official of the prime minister’s office.

On the occasion of the Cabinet reshuffle on Sept. 11, NSS Secretary General Shotaro Yachi, a former Foreign Ministry official, was replaced by Shigeru Kitamura, who originally hails from the National Police Agency. While serving as director of Cabinet Intelligence for nearly eight years, Kitamura was actively engaged in the collection and analysis of economic information in compliance with Prime Minister Abe’s requests. Kitamura is also close to Takaya Imai, special adviser to the prime minister, who originally hails from METI and has advised economy-focused diplomacy to Abe.

“The appointment of Kitamura as NSS head is not only aimed at enhancing the influence of police bureaucrats within the NSS, which has heretofore been controlled by the Foreign Ministry and the Defense Ministry, but is also aimed at shifting the organization into one focused on the economy,” said a source close to the government.