The government intends to strengthen systems to give the Prime Minister’s Office more power over guiding economic security policy, The Yomiuri Shimbun has learned.

To do so, a new policy group is to be established under the National Security Secretariat of the Cabinet Secretariat, possibly this fiscal year. 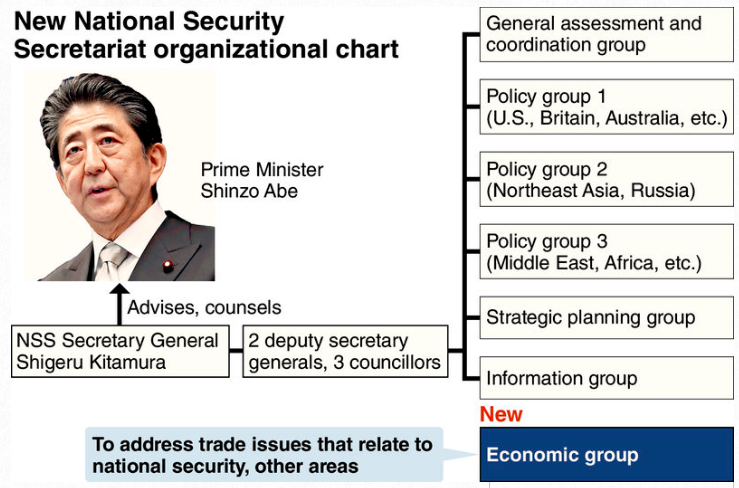 The goal is to ensure the nation’s interests are protected by strengthening the government’s ability to respond to matters such as the trade dispute between the United States and China, China’s Belt and Road Initiative that aims to create a huge economic zone, and the global struggle to take the initiative in 5G next-generation communication standards, sources said.

The NSS, which has a staff of about 80 people, is the secretariat of the Cabinet’s National Security Council. It is currently composed of six groups — three regional policy groups for areas such as the United States and Europe, northeast Asia and the Middle East; a strategic planning group that handles areas such as cybersecurity; an information group that synthesizes data; and a general assessment and coordination group.

The new group would likely be an economic group, though it may be placed within the strategic planning group.

By beefing up the system, the NSC would take on a clearer role as the control tower for economic security matters, in addition to its current duties on diplomacy and national security.

Specifically, the new group would deal with areas such as trade issues, working with other countries on infrastructure development and international cooperation in high-tech fields.

The government is seeking to strengthen its initiatives in economic security in response to the situation in which attempts to pursue national security interests by economic means are becoming more common.

Both the United States and China have invoked security reasons to place sanctions and retaliatory tariffs on each other’s imports. The two powers have also continued their battle for supremacy in information and communications technology and other high-tech fields.

Japan has been asked by the United States to rid itself of products from Huawei Technologies Co., a major Chinese communications firm. An increasing number of matters have required coordinated measures across the economic, diplomatic and security sectors. Japan’s placement of stricter export controls on semiconductor materials to South Korea in July is a case in point.

As the interests of countries involved are often intricately intertwined, the government has determined that there are strategic limitations to having issues dealt with by individual ministries and agencies, such as the Economy, Trade and Industry Ministry or the Internal Affairs and Communications Ministry. Therefore, a new group that can perform comprehensive coordination is needed, the sources said.