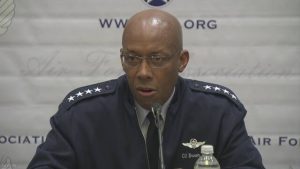 NHK reported this morning that U.S. Pacific Air Forces Commander Brown stated during an interview in Washington yesterday that the Air Force is considering replacing the F-15 fighters currently deployed at the Kadena Air Base in Okinawa with the advanced F-35 stealth fighter or the F-16 fighter aircraft. Gen. Brown also commented on the ROK’s scrapping of its GSOMIA with Japan. While he reportedly remarked that trilateral security cooperation has not been affected so far, he expressed hope for the resumption of the Japan-ROK GSOMIA.