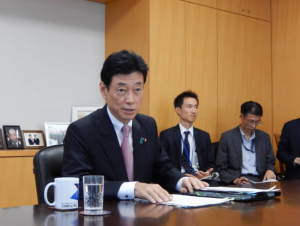 “As far as I understand, the negotiation (between Japan and the U.S.) is in the final stages, to be signed at the end of the month,” Yasutoshi Nishimura said during a group interview with media outlets including The Japan Times. “We’ll make decisions including whether to take specific measures after seeing the outcome.”

Nishimura, who is in charge of economic and fiscal policy, said the government has introduced a variety of measures to protect Japanese farmers from the effects of major trade deals in the past.

He reemphasized that Japan won’t make concessions to the U.S. on tariffs beyond the levels agreed in previous trade agreements, such as the Comprehensive and Progressive Agreement for Trans-Pacific Partnership (CPTPP) and the Japan-European Union trade agreement.

“Farming is a country’s foundation,” he said. “We are going to adopt a foolproof policy to make sure (Japan’s) agriculture, forestry and fisheries are sustainable, growing industries that can compete globally.”

Nishimura’s predecessor, Toshimitsu Motegi, spearheaded the U.S. trade agreement as Tokyo’s chief negotiator with U.S. Trade Representative Robert Lighthizer. Motegi became foreign minister in the recent Cabinet reshuffle and will continue to negotiate with Washington at least until the trade pact is signed.

Beyond that, Nishimura said nothing has been decided, including whether there would be further negotiation toward a comprehensive trade deal or whether Motegi be involved in any such talks.

Japan and the U.S. reached the trade pact “in principle” at the Group of Seven summit in August after multiple rounds of negotiations over the course of about a year — an unusually short time frame for a major deal. Although the specifics have not been revealed, Japan will reportedly slash tariffs on U.S. beef and pork imports, meeting President Donald Trump’s key demand.

He has expressed grievances that U.S. farmers, considered by Trump to be an important block of constituents for his re-election in 2020, have been prevented from competing effectively in Japan’s market compared with farmers in CPTPP signatory states. Trump pulled the U.S. out of the pact soon after becoming president.

As Trump maintains his hawkish stance on trade, especially with China, securing the initial deal would provide a temporary sigh of relief for Tokyo officials. The U.S. president’s unpredictability, though, is a lingering matter of wariness for Tokyo. When Abe and Trump were holding a news conference in Tokyo this May, Trump undercut Abe by saying that he has “nothing to do with TPP,” referring to the pact by its previous name.

“I’m not bound by anything that anybody else signs with respect to the United States,” Trump said. “We are not involved in TPP. So what other countries agreed to is not binding at all on the United States.”

On the looming consumption tax hike from 8 percent to 10 percent starting Oct. 1, Nishimura said the government will continue to raise awareness of programs that are intended to stimulate consumption, including point reward programs for those who make use of cashless payments.

On trade, Nishimura said Japan will take a leadership role to encourage other countries to take part in the CPTPP. Nishimura is also tasked with accelerating social welfare reform in a nation where the birth rate is plummeting and the population graying. A free preschool education program will be rolled out on Oct. 1, and the Abe administration is considering plans that would encourage companies to hire the elderly.