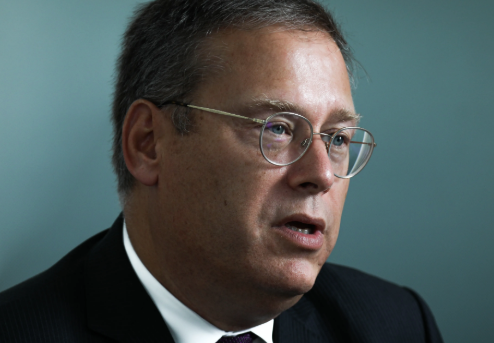 On Sept. 18, former U.S. Consul General to Hong Kong Kurt Tong told the Nikkei in Tokyo that he sees no reprieve for the time being from the unrest that has rocked the territory [for more than three months]. A protest movement has raged in Hong Kong triggered by an extradition amendment bill [that would allow suspects to be handed over to mainland China]. Tong denied the possibility that the People’s Liberation Army (PLA) would intervene.

He expressed concern that there could be a “new normal” for Hong Kong, one in which Hong Kong is unstable politically but still a good place to do business.

Tong served in Hong Kong as the U.S. Consul General for about three years through July this year.

Tong shrugged off the idea that Beijing might mobilize the PLA to quell the unrest, saying, “Beijing understands that (military intervention) will not succeed and but will make the problem worse.” Tong also rejected the notion that Oct. 1, the 70th anniversary of the formation of the People’s Republic of China, is the deadline for the resolution of the crisis.

Regarding the framework of “one country, two systems,” under which  China allows Hong Kong a high level of autonomy, Tong said: “’One country’ is a fact, and it will harm Hong Kong’s value (as a place for business) if the difference between the ‘two systems’ is reduced.” “Hong Kong is a positive for China,” he said, citing its outstanding legal system, proximity to China, and large number of human resources who can speak Chinese and are familiar with the British legal system.

“The success of the ‘one country, two systems’ is a win-win-win for China, Hong Kong, and all countries, including Japan and the United States.” He said that “Hong Kongers are anxious about the future of Hong Kong” even as they accept that they are part of China. “My advice (to the Chinese government) is to give Hong Kong more space.”

Regarding U.S. President Donald Trump’s attempt to connect the Hong Kong situation and the U.S.-China trade negotiations, Tong said that they are “completely separate issues.” “Hong Kong is important to the United States,” Tong added. “It is not a bargaining chip in the trade negotiations.”

“You cannot build a long friendship if you buy your friends with money,” Tong said, speaking in reference to the outlook that China will soon establish diplomatic ties with the Solomon Islands. The island nation in the South Pacific has dissolved its diplomatic ties with Taiwan. Regarding China’s strategy to use its economic power to isolate Taiwan, Tong said “the strategy is short term.” “The economic impact on Taiwan is small, but it will further stoke Taiwan’s anxiety in relation to China.”