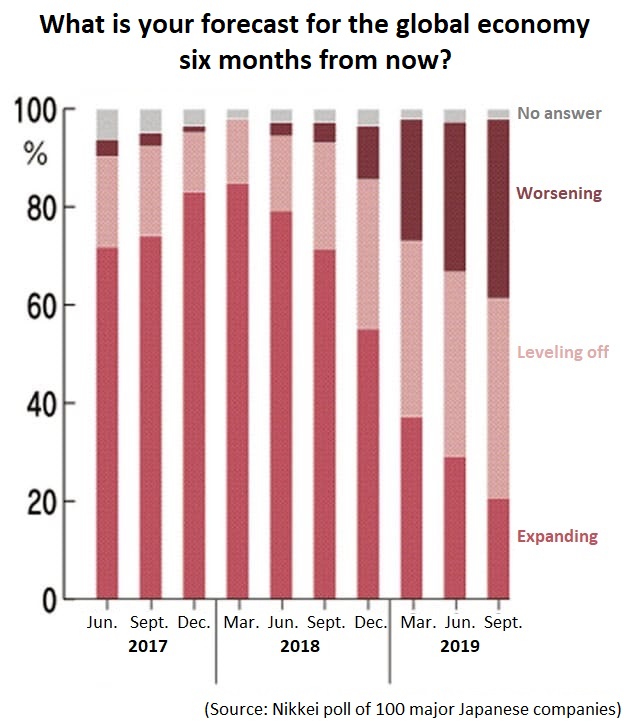 TOKYO — Four out of 10 Japanese corporate chiefs believe the global economy is on the decline, a Nikkei poll released Friday shows, the worst outlook in seven years indicating a sense of fatigue from the U.S.-China trade war.

Similarly, 36.6% of business leaders say the global economy will become worse in six months, up 6 points from the last survey, and overtaking those who predict an expansion.

The latest survey, conducted between Aug. 28 and Sept. 13, compiled responses from CEOs, chairmen and other top executives at 145 major companies. 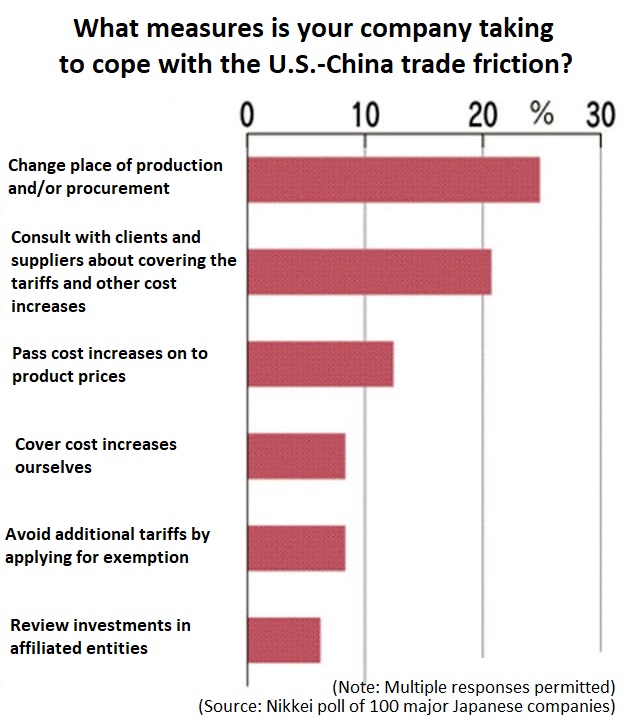 The majority hold a negative view toward trade tensions between the U.S. and China, as well as the weakening Chinese economy. “I don’t see how the U.S.-China trade frictions will play out, and there are concerns about a global economic slowdown,” said Hitoshi Ochi, president of Mitsubishi Chemical Holdings.

Itochu President Yoshihisa Suzuki said, “There are growing uncertainties stemming from the political and diplomatic fronts, so corporate managers have no choice but to be cautious.”

When it comes to the soured relationship between Japan and South Korea, 26.2% of respondents say it will effect their business. “South Korea has been the leading importer of beer for eight years, but conditions have made it difficult to maintain that position,” said Akiyoshi Koji, president of the brewer Asahi Group Holdings.

Many business managers cite the consumption tax increase that will go into effect Oct. 1 as a reason for stalled future growth. “The consumption tax is about to be raised, and I anticipate that the domestic economy will continue to be at a standstill,” said Takashi Sawada, president of convenience store chain FamilyMart.

Despite the economic misgivings, the vast majority of business leaders are taking a wait-and-see strategy. While 9.7% say they will decrease capital expenditures for the current fiscal year, 80.6% say with will keep the amount in place, and 4.2% reported plans to increase spending.