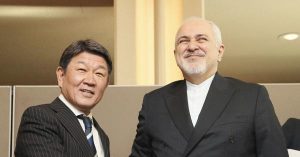 All national papers except Asahi reported today from New York on a foreign ministerial meeting between Japan and Iran that was convened in New York on Monday, saying that Foreign Minister Motegi urged his Iranian counterpart Zarif to exercise restraint to defuse tensions with the U.S., Saudi Arabia, and others. The Japanese official reportedly voiced “serious concern” about the recent drone attacks on oil platforms in Saudi Arabia. He also pressed Tehran to abide by the Iran nuclear accord, asking it to halt uranium enrichment beyond the scope permitted in the international pact. Zarif reportedly expressed gratitude for Japan’s diplomatic efforts to deescalate the situation.

In a related story, Mainichi wrote that Japan’s mediation between the U.S. and Iran is running into difficulties following the recent attacks on oil facilities in Saudi Arabia. As Prime Minister Abe is expected to hold talks with Iranian President Rouhani in New York today, the daily projected that the premier is likely to voice “profound concern” about the incident since Japan imports 40% of its oil from Saudi Arabia. Abe is set to press Rouhani to deescalate tensions and comply with the Iran nuclear pact.