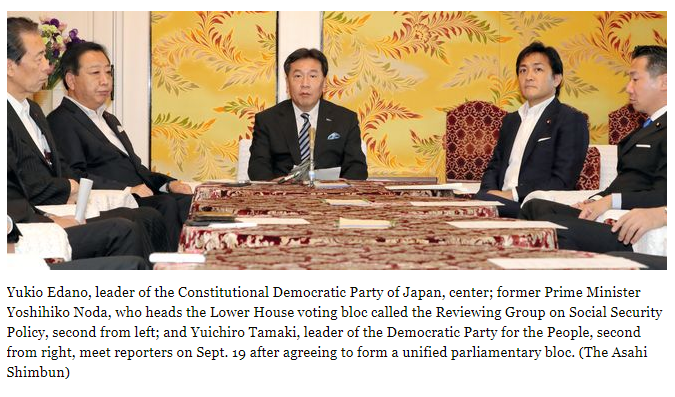 We hope the coalescence of opposition forces into a sizable parliamentary bloc will shake the Diet out of its current “ikkyo tajaku.” That is, the state of being run roughshod by the ruling Liberal Democratic Party while all opposition parties remain pathetically weak and fragmented.

This Lower House bloc is the largest formed by opposition parties since Prime Minister Shinzo Abe returned to power in 2012 for his second stint.

It is all too clear that the long-ruling Abe administration has manifested its arrogance and imprudence repeatedly over the last six years and nine months.

One perfect case in point: At the latest Cabinet reshuffle, Abe gave the education minister’s portfolio to Koichi Hagiuda, who was suspected of involvement in the shady government decision to let the Kake Educational Institution open a faculty of veterinary medicine.

And in matters of Diet management, the Abe administration has ignored opposition parties’ calls for convening extraordinary Diet sessions or Budget Committee meetings, in total disregard of the legislature’s intended function of keeping the administration in check.

There is no question that the fragmented and effete opposition forces are partly to blame for this. But now that they have come together, they must live up to their responsibility of severely monitoring the administration and reining it in.

It took the leaders of the opposition parties a month to reach their final agreement on the parliamentary bloc. Apparently, much of that time was taken up trying to come up with a name for the bloc and coordinating personnel matters.

The whole lengthy process created the impression that there were still hard feelings over the past split. And it is also a fact that some people are viewing this “reunion” coolly, likening the parties to a divorced couple who got back together again.

Should they start bickering again and revert to their infighting days of Minshuto and its successor, Minshinto (the Democratic Party), they cannot expect to regain the public’s trust. Their mission now is to remain united and stand up to the Abe administration. They must resolve to strive hard for an outcome that represents a positive synergy exceeding the physical size of the union.

Their first test will be the extraordinary Diet session to be convened on Oct. 4. In the past, lack of suprapartisan coordination often resulted in different opposition parties asking the same questions in the Diet. From now on, they must prevent that sort of redundancy through closer collaboration among individual legislators, which in turn should help enliven Diet debates.

On policy matters, there is no denying that not all members of the bloc see eye to eye on issues such as the consumption tax hike, nuclear power generation and constitutional amendment. This cannot be helped, given the multipartisan nature of the caucus.

However, the members will need to debate one another thoroughly and find common ground, so as not to let the ruling coalition go after a chink in their armor, so to speak.

The last Lower House election in 2017 followed an “ambush dissolution” that caught opposition parties unprepared and in disarray–just as the ruling coalition anticipated.

The next Lower House election is bound to happen within the next two years, and it is of crucial importance for opposition parties to start preparing for it by being able to offer voters an alternative to the current ruling coalition of the LDP and Komeito. A key to success lies in securing the cooperation of opposition parties that are not in the new parliamentary bloc.

After the Upper House election this past summer, CDP leader Yukio Edano said he “is resolved to present a viable alternative (to the current administration)” in the next Lower House election by further strengthening collaboration among opposition parties.

Whether the voting public will agree with Edano depends very much on the new bloc’s performance in the days ahead.