Editorial: Academics must play no part in helping to develop weapons 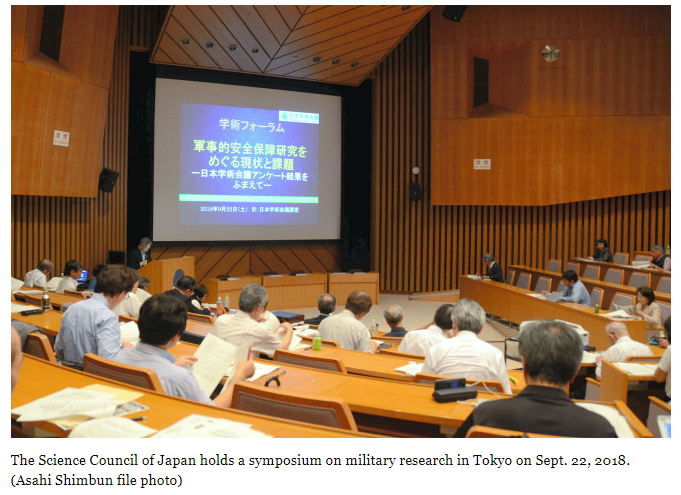 The Defense Ministry’s Acquisition, Technology & Logistics Agency (ATLA) on Aug. 30 disclosed the fiscal 2019 results of its security technology research promotion system, an open-to-the-public program that provides government funding for research projects that could lead to the development of military equipment, including munitions.

The program received 57 applications, of which 16 were approved. But the number of applications fell for the second consecutive year, and forced the ALTA–for the first time since this program came into being five years ago–to reopen the competition after the initial application deadline had passed.

But only eight applications were received from universities–an all-time low.

The program itself is quite generous, offering up to 2 billion yen ($18.59 million) over five years. But its obvious lack of appeal likely owes mainly to the efforts of the Science Council of Japan to apprise the public of the problems inherent in this program.

We applaud the Science Council for taking the side of scientists who on ethical and professional grounds want nothing to do with such a project.

Back in 1950 and 1967, the council stated its position against military research. This was strongly echoed again in a statement issued two years ago, which said the program “has many problems due to these governmental interventions into research.”

Not only is it quite clear that the program’s purpose is to promote the development of military equipment, but government officials are also keeping tabs on the progress of each research project. And that, the council concluded, renders the program incompatible with the academic community, whose mission is to promote values such as human rights, peace and welfare, in keeping with academic freedom.

The ATLA strenuously denies “ever interfering with academic research.” Many universities have reiterated their goal of having nothing to do with military research. In fact, there have been cases of universities withdrawing their applications after they were approved for funding.

Such an attitude is steadily taking hold. However, some concerns still remain.

A Science Council survey of universities and research institutes around the nation last year found that about half of the respondents have no set policy or inhouse screening procedures for applying for the ATLA program.

It is the fate of science and technology that any achievement can be “dual-used” for both peaceful and military aims. But to hold individual researchers responsible for the ultimate outcome would be unfair and unrealistic, and could hinder personnel exchanges and transfers where gaps in thinking exist among universities and research organs.

We suggest that the Science Council take the lead in establishing a set of guidelines, based on discussions already conducted so far.

Especially among younger researchers, funding is what many say they want more than anything. They also are against organizations limiting the freedom of individual researchers.

The shortage of funding is to be blamed on the government’s negligence to provide decent working conditions to researchers. The government must make improvements, not by “luring” them to military research.

As for personal freedom, young researchers ought to understand that any self-imposed discipline within the scientific community is not an infringement on the rights of individuals, but a means by which to protect the future of research.

In the not-too-distant past, scientists in Japan as well overseas were incorporated into their respective government’s war effort and caused tremendous damage.

The scientific community must continue to face, in all earnestness, its heavy responsibility of vowing never to repeat the same mistake and passing on this lesson to the younger generation.