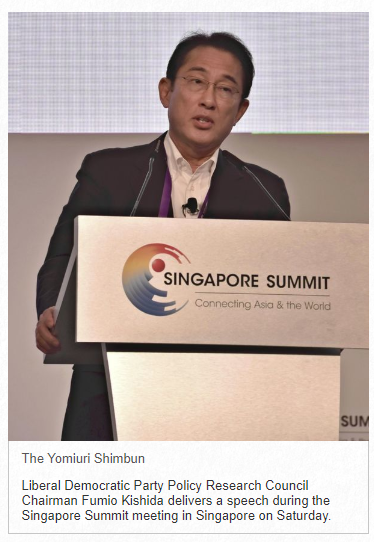 When Kishida attended the Singapore Summit meeting on Saturday, he tried to boost his profile by playing on his strengths in foreign diplomacy.

After delivering a speech at the summit meeting, Kishida referred to Abe’s tenure as LDP president, which expires in September 2021, and then said Japan will have to select its next leader. He said he wants to become a politician who can lead the next generation.

Kishida, who also had a meeting with Singapore Prime Minister Lee Hsien Loong on Friday, told reporters that the meeting was a chance to renew his old friendship with Lee.

Kishida served as foreign minister for four years and seven months from December 2012. He considered the visit to Singapore an excellent opportunity to boost his profile both at home and abroad, according to sources close to Kishida.

Among other potential successors to Abe, former LDP Secretary General Shigeru Ishiba has been enjoying high public popularity and Chief Cabinet Secretary Yoshihide Suga also attracted wide public attention when he made the announcement of the new era name.

LDP lawmaker Shinjiro Koizumi also is regarded as a new potential successor to Abe, given that he entered the Cabinet for the first time as an environment minister in the Cabinet reshuffle.

As Kishida’s basic strategy is to succeed Abe in a smooth transfer of power, he plans to make efforts to achieve the goal of revising the Constitution on issues including stipulating the Self-Defense Forces, which is being prioritized by Abe.

On Saturday, Kishida told reporters that he wants to make a move toward the amendment to the Constitution with the entire party involved with the issue. He also showed his intention to have meetings with local government leaders to discuss the subject.

As the Kishida faction has a long history of promoting the pacifist line, he may have to manage a tough situation. “[Kishida’s move regarding the Constitution] will have an opposite effect if conflicting opinions are raised within the faction,” a mid-ranking LDP lawmaker said.