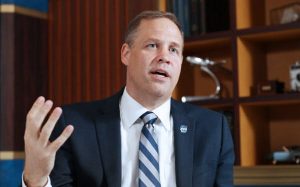 Nikkei ran an interview with NASA Administrator Bridenstine that was conducted in Tokyo on Tuesday. The paper wrote that the NASA chief reportedly expressed hope for Japan’s cooperation with the Lunar Platform Orbiting Gateway, a U.S.-led international effort for manned space missions, in the areas of transporting goods to the space station and developing habitat modules. The paper wrote that Japan is expected to formally announce its participation in the project by the year end. The paper also wrote that the administrator said it is “highly likely” that Japanese astronauts will stay at the Gateway station or participate in the lunar exploration mission. He added that Japan is a very reliable partner with great technology. Yomiuri also carried an interview with NASA Administrator Bridenstine.

NHK reported last night on a speech Bridenstine gave to students at the University of Tokyo. He reportedly explained the Gateway project, remarking that Japan has a major role to play in it. He spoke of plans to send manned missions to Mars and called for Japanese youth’s cooperation with NASA in space exploration. NHK said the NASA administrator will hold a news conference today on plans for future cooperation between NASA and its partners.