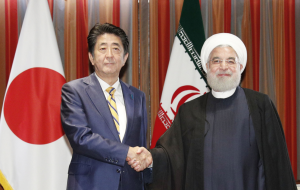 All national dailies reported on Prime Minister Abe’s bilateral talks with Iranian President Rouhani in New York on Tuesday. The papers wrote that at the outset of the meeting Abe told Rouhani he welcomes the president’s willingness to achieve peace through dialogue as he expressed during their talks in Tehran in June.

Kyodo News reported updates on the Abe-Rouhani meeting, saying that Abe told Rouhani that Japan expects Iran to play a constructive role in stabilizing the Middle East in the wake of attacks on Saudi Arabia’s oil facilities. Abe reportedly also urged Iran to fulfill its responsibility as a nation along the Persian Gulf to ensure the safe passage of shipping, a critical issue for Japan as it depends on the Middle East for oil. Abe expressed “strong concern” over the worsening Middle East situation following the Sept. 14 attacks, acknowledging there are doubts that Houthi rebels in neighboring Yemen were to blame. The Iranian president was quoted as telling Abe that he hopes to cooperate with Japan as regional security is important.