NASA administrator: Let’s go to the moon together 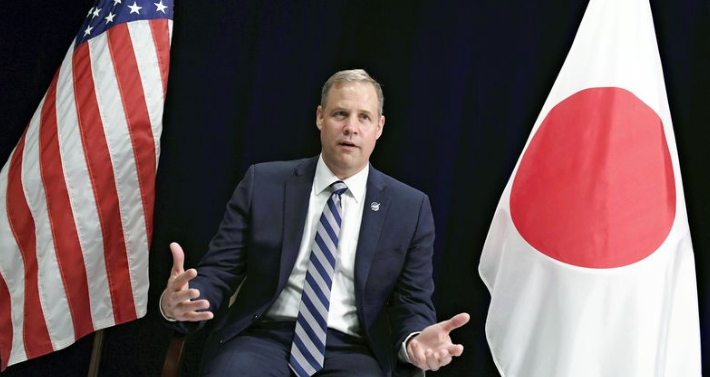 NASA Administrator Jim Bridenstine speaks during an interview with The Yomiuri Shimbun.

Jim Bridenstine, the administrator of the National Aeronautics and Space Administration (NASA) has stressed the need for Japan and the United States to work together as international partners to develop a lunar rover and other vehicles.

“We see a day when we have American astronauts and Japanese astronauts living and working on the surface of the moon together,” Bridenstine told The Yomiuri Shimbun during an interview in Tokyo on Tuesday.

The United States has set a goal of sending its astronauts to the moon again by 2024 by building a station that orbits around the moon, its second manned space exploration project following the current International Space Station (ISS) project. The Japanese government is expected to officially announce its participation in the project by the end of this year.

“When we go to the moon, within five years, Japan will be a big part of that architecture,” Bridenstine, 44, said. “We are very interested in whether JAXA would be interested in helping us to [bring] services and logistics to the space station in orbit around the moon, which we call the Gateway.”

JAXA is currently developing the supply ship HTV-X, and Bridenstine said he believes the ship has the ability to transport goods to the Gateway.

In regards to the framework of countries participating in the project, Bridenstine touched on the history of space exploration with Russia, saying: “Space collaboration remains separate from geopolitics … we have now the ISS where we have had American astronauts and Russian cosmonauts living and working in space for 20 years. So this has been a long-term relationship that has been positive for both countries and my intention is to keep that going.”

As for China, which is eager to explore the moon, Bridenstine said, “We don’t anticipate cooperating with China, and we can rule that out in the future.”