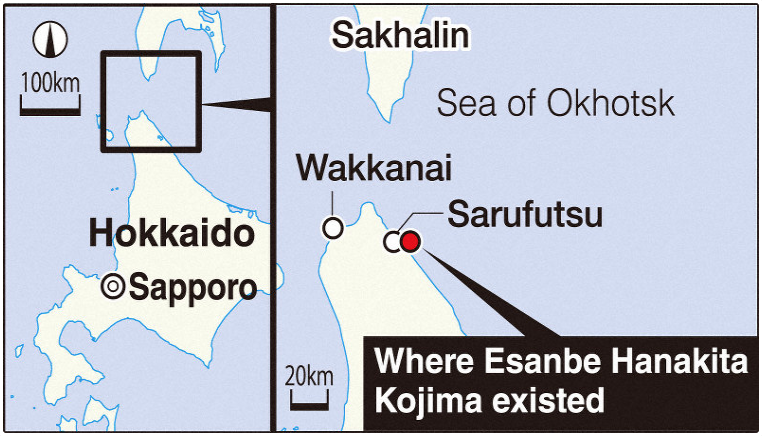 SAPPORO — The Japan Coast Guard (JCG) announced on Sept. 24 that an island about 500 meters off the coast of Sarufutsu in this northernmost prefecture “had disappeared” beneath the sea according to its investigation.

It had been suggested in the past that Esanbe Hanakita Kojima in northern Hokkaido may have vanished due to erosion. It is the first time that one of Japan’s remote border islands, which had numbered 484, has completely disappeared.

The 1st Regional Coast Guard Headquarters based in Otaru, Hokkaido, measured the depth of water and carried out other investigations of the island site in April and May.

The United Nations Convention on the Law of the Sea defines an island as “a naturally formed area of land, surrounded by water, which is above water at high tide.” Investigators say the island was nowhere to be seen and instead confirmed the existence of a shallow.

An area of land that “is surrounded by and above water at low tide but submerged at high tide” is called a low-tide elevation under the convention. Elevations may be used as base points for the calculation of territorial waters if they are situated at a distance not exceeding 12 nautical miles (about 22 kilometers) from the coastlines of the mainland or an island. The JCG will further investigate to check if the island has become a low-tide elevation, among other details.

Even if Esanbe Hanakita Kojima does not qualify as a low-tide elevation, it does not affect Japan’s exclusive economic zone, but the nation will likely lose around 0.03 square kilometers of its territorial waters.

The JCG says it will take at least two years for the results of the additional investigation to emerge.