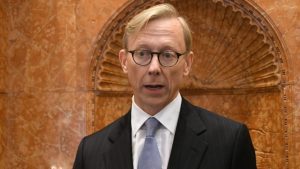 Nikkei ran an interview with Special Representative for Iran Brian Hook, who reportedly urged Japan to denounce Iran for the recent oil attacks in Saudi Arabia. He reportedly stressed that it is most important to isolate Iran in order to defuse Middle East tensions. The DOS official reportedly said he hoped for the participation of Japan, South Korea, and other Asian countries in the coalition to protect critical waterways in the region.