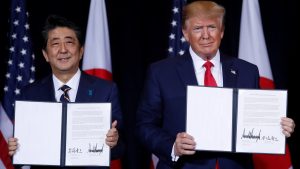 All national papers reported on the signing by President Trump and Prime Minister Abe in New York on Wednesday of a joint statement on a new bilateral trade agreement, projecting that the pact may take effect as early as the year end pending Diet approval. The two sides reportedly agreed that import tariffs on U.S. pork and beef will be immediately reduced to TPP levels. Japan also reportedly agreed to set up a low-tariff quota for American beef imports. Washington separately agreed to Japan’s eliminating a tariff-free annual quota of 70,000 tons for U.S. rice that was part of the original TPP agreement. In signing the statement, President Trump reportedly said: “This is a huge victory for America’s farmers, ranchers, and growers.” He also reportedly emphasized that it is a “fair and reciprocal” trade agreement.

The dailies noted that Tokyo obtained an assurance that Japan will remain exempt from higher U.S. auto tariffs. The two sides also reportedly agreed to continue discussions on the proposed removal of import duties on Japanese cars and components. The U.S. will also reportedly expand the low-tariff quota for Japanese beef imports. In meeting with the press ahead of the signing, PM Abe said: “The outcome of the negotiations is actually a win-win solution for Japan and the United States.”

Asahi opined that the deal was a “setback” from the standpoint of promoting free trade since both sides were keen to protect their domestic industries. According to the paper, the Trump administration strove to defend the farm and auto sectors with the goal of increasing jobs at home and reducing trade deficits in a bid to boost the President’s reelection campaign. The paper wrote that Japan was anxious to protect its own farm sector and at the same time was desperate to avert the imposition of high tariffs on Japanese vehicles.

Nikkei, noting that the accord will likely take effect ahead of the United States-Mexico-Canada Agreement (USMCA), asserted that this will be the first substantive trade accomplishment that President Trump will deliver to American workers and farmers. The business daily wrote that the Trump administration, which is eager to please Midwestern farmers and ranchers hurt by trade friction with China, elected to pursue with Japan a “mini deal” focused on the farm sector so as to be able to use the Trade Promotion Authority, which enables the early effectuation of a trade pact with a foreign partner by circumventing congressional screening.