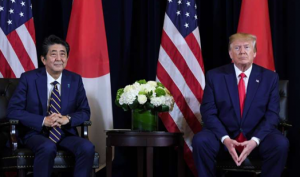 NHK, TV Asahi and NTV reported this morning that Prime Minister Abe and President Trump discussed the Middle East situation at their summit meeting last night. They reportedly agreed to cooperate to ease tensions and stabilize the region, and condemned the recent attack on Saudi crude oil facilities. While the President reportedly said Iran was responsible for the attack, Abe merely said Japan is collecting and analyzing information. The President reportedly expressed hope for Japan, which has friendly relations with Iran, to play a role. TV Asahi quoted a Japanese government source as saying that while the President takes a hardline on Iran, he does not rule out dialogue. According to NHK, while the President harbors doubts about France’s mediation efforts, he expressed appreciation for Japan’s efforts and hope that its role will be fruitful. There was reportedly no mention of the coalition of the willing for Hormuz security, according to the broadcaster. Abe reportedly said that Japan will protect its own tankers and take necessary actions. A Japanese government source was quoted as saying that Iran diplomacy will require perseverance, indicating that Japan will persist in efforts to promote dialogue between the U.S. and Iran.  NHK and NTV reported that the two leaders also discussed North Korea and affirmed the importance of Japan-U.S.-ROK security cooperation.