On July 19, a 51-year-old man was sentenced to 13 years in prison for fatally stabbing his 12-year-old son in Nagoya in August 2016. (Asahi 7/19) He was coaching the boy ahead of the entrance exam for a prestigious middle school, but he became increasingly violent when his son failed to meet his expectations, threatening him with a box cutter, then a fruit knife, and finally a kitchen knife, which was ultimately the murder weapon. The incident sparked a fresh round of debate on the issue of “education abuse” (kyoiku gyakutai).

Education abuse involves the verbal or physical abuse of children by parents as they exhort them to study harder especially for entrance exams. (Mainichi 7/28)

Journalist Toshimasa Ota, author of a recent book on the subject, classified parents guilty of education abuse into three types: parents who passed entrance exams to prestigious schools and think only losers don’t go to good schools, parents who failed to enter good schools and consequently suffer from an inferiority complex, and parents who went to a good school but feel inferior for not having gone to a better one. These parents think their kids have to go to a “good” school no matter what, with little or no regard for their aptitude or wishes, and they believe that everything they force their kids to do is justified because it’s “for their own good.” (Asahi 7/19)

According to Ota, education abuse is particularly serious in families with children studying to enter private middle schools because due to their tender age they are not psychologically equipped to disagree with their parents or tell them they can no longer cope. But the children’s misery doesn’t end if they gain admission to the desired middle school. Abusive parents continue to push their children to strive for “good” high schools and “good” universities. The stress and anxiety caused by the parents’ verbal and physical abuse can lead to suicide, eating disorders, hair-pulling disorders, self-injury, and truancy, as well as more long-term effects such as trauma, anxiety, depression, low self-esteem, poor communication skills, and even post-traumatic stress disorder.

There do not appear to be any accurate statistics on education abuse, and laws against child abuse do not cover it. The Education Ministry’s elementary and secondary education bureaus investigate corporal punishment, but they don’t collect data on education abuse. Similarly, the Ministry of Health, Labor and Welfare (MHLW) only tracks and investigates child abuse and truancy. (Japan Times Feb. 29, 2016)

However, data from the MHLW’s Fiscal 2017 report on cases brought to children’s welfare centers nationwide shows a steady increase in the number of reported cases of child abuse.

Moreover, the ministry’s figures on the type of abuse reveal that the number of cases of psychological abuse, which include education abuse, was 72,197 in FY2017, making up 54% of all child abuse cases. This ratio was more than double the 21.3% marked in Fiscal 2008. Furthermore, the number of psychological abuse cases grew by 694% from 2008 to 2017, more than three times faster than the 214% increase in overall child abuse cases.

Orange Movement, an NPO working for the prevention of child abuse, compiled data based on MHLW’s statistics on trends in four types of child abuse. The data points to a rapid rise in psychological abuse. 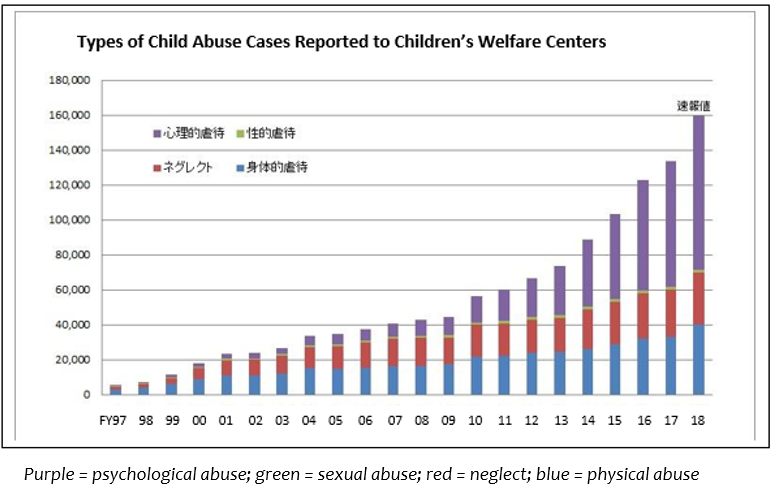 Experts cite a combination of factors behind education abuse, such as parents regarding their children as the means to fulfill their unrealized dreams in life, whether consciously or unconsciously; parents mistakenly assuming that children can be educated in the same way as human resources development is conducted in the corporate setting; and parents who experienced education abuse as children visiting the same abuse on their own children. However, it appears that the underlying phenomenon is the parents’ deep-rooted belief in academic achievement as the most important yardstick of personal merit and the foremost key to success in life—a believe that drives them to push their children harder and harder “for their own good.”