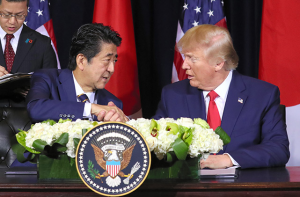 All national dailies ran on their front and inside pages detailed reports on the new bilateral trade agreement reached between the United States and Japan. The papers said that the auto industry was relieved there will be no additional tariffs on Japanese cars and that Japanese farm lobbies responded positively to the trade deal. Asahi speculated that the opposition parties are set to grill the GOJ in the upcoming Diet session for concluding what they characterize as an “unfair trade deal.” The paper further speculated that Japan will be urged to make other concessions in the next stage of trade negotiations focusing on goods and services.

The papers also wrote that retailers and restaurant chains welcomed the new trade agreement, which reduces tariffs on beef, pork, wine, and other products, with the hope that increased imports of these American products will help boost business by stimulating consumption. Mainichi wrote that although Japan was forced to make concessions, the agreement benefits Japanese consumers by offering American beef and other products at lower prices.

Nikkei wrote that the Trump administration succeeded in securing reduced levies on American beef and pork ahead of the presidential election next year. The paper added, though, that although Prime Minister Abe called the agreement a “win-win deal,” many outstanding issues, including auto tariffs, have been carried over for future negotiations.