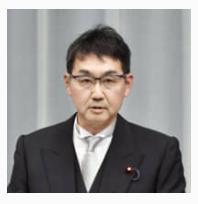 On Friday, newly appointed Justice Minister Katsuyuki Kawai promised to reform his ministry, including a pledge to more stringently enforce laws and regulations related to immigration.

Kawai said the increase of the foreign worker quota under a new visa program that took effect in April will be a focal point during his tenure, alongside enhancing immigration controls through more rigorous screening and stricter immigration checks.

“Japan has seen a record number of visitors as well as long-time residents, and it is essential to step up measures to maintain a high level of rigorous immigration control while ensuring smooth immigration checks at the border,” Kawai said Friday during a group interview with media outlets, including The Japan Times.

“But at the same time, I’m aware of the severe labor shortage across Japan and business owners’ expectations to employ (blue-collar foreign workers) to compensate for such problems. So therefore, the Justice Ministry is committed to work together with other governmental institutions to enable more firms to hire labor from overseas.”

The new visa system that took effect on April 1 will allow some 345,000 blue-collar workers with specified skills and expertise in 14 sectors that face acute labor shortages — includes construction and nursing care — to enter Japan over five years.

With the slow pace of the admissions process, Kawai admitted the government was still struggling. Within this fiscal year, the government aims to accept 47,550 such foreign workers.

“I do believe that on the path to success you need to start small and let it grow, and I hope this system is on the right path,” Kawai said. He also said he was planning to increase the number of evaluation exams and to enhance services aimed at matching applicants with companies struggling to maintain an adequate labor force.

Kawai said, however, that he was not planning to abolish the Technical Intern Training Program for unskilled workers, which has long been criticized for allowing certain employers to exploit foreign workers as cheap labor, citing positive feedback from business owners using such trainees.

The justice minister added that his new policies will also target foreign nationals staying in Japan illegally who refuse to return to their home countries, including those in detention, pointing to a trend of increasingly longer detention periods.

“The problem is far from being settled,” he said.

Kawai, who assumed his post in Prime Minister Shinzo Abe’s Cabinet reshuffle on Sept. 11, said he has already requested the Immigration Services Agency, an affiliate of the Justice Ministry, to solve the problem using all available legal measures. He said the ministry has already tasked a team to handle the long-term detention problem.

“I’m aware that there are many people in Japan who cry out in anguish and many who aren’t even able to raise their voices,” he said, referring in particular to the victims of child abuse. He said the ministry is now working on new countermeasures.

His comment comes amid criticism over inadequacies in the current system that failed to prevent cases of child abuse that led to tragic deaths.

However, Kawai’s new policies and planned changes in laws and regulations won’t affect the capital punishment system, which has long been criticized by many in the international community as cruel and inhumane. The minister said he has no intention to changing the system.

“I don’t think it would be appropriate to abolish the death penalty,” he said. “The existence of the death penalty system is a critical issue that lies at the basis of Japan’s penal code, which should reflect public opinion and requires thorough consideration from various angles.”

He said the latest public opinion polls on the death penalty conducted by the Cabinet Office show that 80.3 percent of citizens say the death penalty is an unavoidable punishment for those who have committed heinous crimes.

“But I’m aware this is the most severe form of punishment as it ends one’s life and it goes without saying that it should be based on the highest of ethical standards,” he said.

He promised to run the ministry with transparency.

“I want to transform the Justice Ministry into an institution that will provide support to all people waiting for help and stand by them in the truest sense,” he added.

Calling the Justice Ministry “the most conservative of all governmental institutions,” Kawai added that the new approach will involve more innovative measures including the use of the most advanced technology available to improve the ministry’s operations.