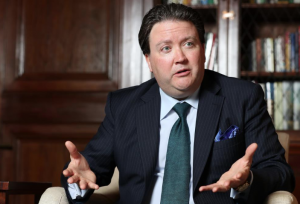 Saturday’s Sankei ran an exclusive interview with Deputy Assistant Secretary of State for Korea and Japan Marc Knapper that was conducted at the U.S. Ambassador’s residence in Tokyo on Friday. The paper wrote that DAS Knapper commented on the Japan-ROK GSOMIA, reportedly saying he hopes that South Korea will rethink its decision and return to the defense intelligence sharing pact. The paper wrote that he reportedly said an effective response to a crisis would be difficult without the GSOMIA. Quoting him as reportedly saying that South Korea still has time to review its decision until the accord ends on November 23, the paper interpreted this remark to mean that DAS Knapper strongly urged South Korea to return to the accord. The paper also quoted the DOS official as saying that the recent frayed ties between Japan and South Korea harm the national interest of the United States. According to the paper, DAS Knapper said that although the United States has no intention to mediate between Japan and South Korea, it will play a positive role in urging them to narrow their differences. Concerning the joint flight training conducted by China and Russia over the Sea of Japan in July, DAS Knapper reportedly said that it is indispensable for the United States, Japan, and South Korea, which share common values, to cooperate in alliance relationships.