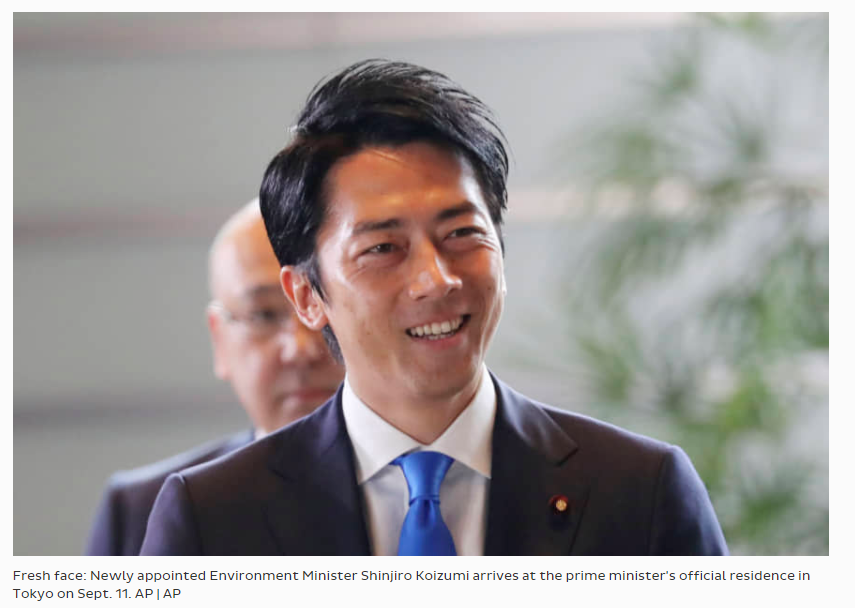 Since the new Cabinet was announced on Sept. 11, the focus has been on Shinjiro Koizumi as environment minister. Described by some as earnest but lacking in substantive ideas, the 38-year-old lawmaker has tried to make the most of the spotlight, commenting on Japan’s role in addressing climate change and visiting Fukushima Prefecture to assure residents that he’s aware the stricken nuclear reactor has ruined their lives. The timing of the appointment was especially opportune in that it coincided with the U.N. Climate Action Summit in New York, although Koizumi may have forfeited some of the international climate crisis community’s good will by dining out at an expensive steak house the night before the summit. Beef production is increasingly cited as a prime culprit of global warming.

One person who is definitely unimpressed with Koizumi, but for different reasons, is his predecessor, Yoshiaki Harada, who advocated for releasing water tainted by radioactive tritium from the Fukushima No. 1 nuclear power plant into the ocean. Koizumi has said he prefers looking for a different solution.

In an interview with weekly magazine Shukan Bunshun, Harada clarified his position, saying the contaminated water had been his concern ever since he became environment minister in October 2018, explaining that he, too, went to Fukushima after taking over, and when he got there was shocked at all the tanks of water. He asked his hosts what they were.

The level of ignorance suggested by this admission is sobering. Did Harada really go to Fukushima without any knowledge of what he might expect? Was he not briefed on the basics of the Fukushima catastrophe and its aftermath? Even if he hadn’t done any homework, he was a bureaucrat at the trade ministry in the 1970s and, at one time, worked on environmental pollution issues. This lazy approach epitomizes the pointlessness of periodic Cabinet reshuffles, which many people think are carried out purely for political purposes.

A different article in the same issue of Shukan Bunshun took the idea further, making the case that the reshuffle, Prime Minister Shinzo Abe’s second in the past year, was implemented to clear out “leftover inventory” in the ruling coalition, meaning lawmakers who for reasons of seniority or membership in a particular faction were in line for a Cabinet position but hadn’t gotten one yet. In essence, they were the dregs of the party.

Among them are what Shukan Bunshun calls the “three T’s” — a trio of politicians whose careers have been plagued by image problems. Ryota Takeda had been, according to Shukan Bunshun, drinking alcohol when he received a call from Abe telling him he would be the chairman of the National Public Safety Commission. Shukan Bunshun knows this because Takeda was dining with a group of reporters at the time. Takeda’s problem is his alleged association with underworld groups and right-wing loose cannons from his home constituency in Fukuoka Prefecture. Some supporters have been accused more than once of violating election rules, and there is concern as to whether Takeda’s new post gives him influence over the police.

The new reconstruction minister, Kazunori Tanaka, was first elected to the Diet in 1996. His stigma is also related to underworld figures. The third “T,” Naokazu Takemoto, has received much publicity for his perceived lack of suitability for the post of IT minister, since he doesn’t appear to know much about computers and as of Sept. 11 his website had been inactive for some time.

However, the most controversial Cabinet appointee is probably Koichi Hagiuda, who was deputy chief Cabinet secretary when the educational institution Kake Gakuen, whose head is a friend of Abe’s, won the right to build a veterinary school in Ehime Prefecture under questionable circumstances. Political reporter Masao Yora, writing in the Mainichi Shimbun, says that Hagiuda’s appointment as education minister shows Abe’s arrogance. It’s not just that Hagiuda’s actions during the Kake scandal has proven his unfitness for the post. His reactionary opinions guarantee that the appointment will offend Abe’s liberal adversaries in government, which seems to be the point. In his occasional column for Tokyo Shimbun, former education vice minister Kihei Maekawa says much the same thing. Hagiuda has a scroll of the Imperial Rescript on Education hanging on the wall of his Diet office and, while he understands that the rescript, a pre-World War II document outlining how the public should serve the emperor, no longer has any legal standing in Japan, Hagiuda feels that its purport still has “meaning” for everyday life.

The tabloid Nikkan Gendai went even further, calling the new Cabinet a “cult.” Twelve high-ranking members of the government are executives of the conservative lobbying group Japan Conference (Nippon Kaigi) and 12 — there is overlap — are associated with the anti-leftist Unification Church, including six of the 13 rookie ministers. Some of these members have worked on behalf of the International Association of Parliamentarians for Peace, a project one of whose aims is to make the Unification Church a state religion in various countries, including Japan. Although it sounds ironic that these lawmakers are associated with a religion based in South Korea, given the Abe administration’s fractured relationship with Seoul at the moment, they may sympathize with the church’s stance that states should return to a purer nationalism.

In such an environment, Koizumi’s professions about doing right by the environment, though now more generally characterized as being empty and tone deaf, point to at least some engagement with his new post, even if he was appointed purely for the sake of propping up Abe’s support rate. Media organizations always fall for this scheme, and that’s one of the reasons the severity of Typhoon Faxai was under-reported when it made landfall in Chiba Prefecture two days before the new Cabinet was installed. The government was criticized for its lack of attention to the disaster, but news outlets also share some blame. They’re so easily distracted by stories of marginal significance. The government counts on it.