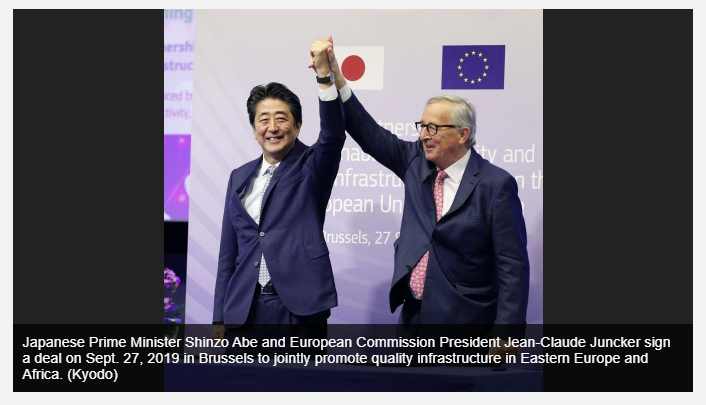 BRUSSELS — Japan and the European Union signed on Friday a deal to jointly promote quality infrastructure in Eastern Europe and Africa, in a veiled counter to China’s expanding global ambitions through its Belt and Road infrastructure project.

In the document inked by Japanese Prime Minister Shinzo Abe and European Commission President Jean-Claude Juncker in Brussels, the two sides pledge to fully take into account “partners’ needs and demands and paying utmost attention to their fiscal capacity and debt-sustainability” when investing in transport, energy, and digital and data infrastructure.

“The infrastructure we build from now must be quality infrastructure. What is necessary is sustainable, comprehensive and rules-based connectivity,” Abe said in an EU meeting in the Belgian capital.

“It is we, the EU and Japan, who are able to provide connectivity in every domain, from transport, telecommunications, electricity, and the free flow of data with trust, to outer space,” he said.

“Japan and the EU endeavor to ensure synergies and complementarity between their respective cooperation on connectivity and quality infrastructure with partner third countries and coordinate action, notably in the regions of the Western Balkans, Eastern Europe, Central Asia, Indo-Pacific, as well as in Africa,” the document said.

Japan and the 28-member union intend to ensure “transparent procurement practices,” as well as “free, open, rules-based, fair, non-discriminatory and predictable regional and international trade and investment,” it said.

Abe said that a strategic partnership agreement, which Japan and the European Union signed in July last year, allows the two sides to advance cooperation in a wide range of areas from disarmament and counterterrorism to outer space to the oceans.

He also hailed a Japan-EU free trade agreement that came into force in February, saying the pact is expected to boost Japan’s gross domestic product by 1 percent and its employment by 290,000.

The FTA “made Japan and the EU flag bearers of free trade, while our SPA made us the guardians of universal values” such as democracy, the rule of law, human rights and freedom, Abe said.

Tokyo and Brussels are “two sturdy pillars, upholding common values under one and the same flag,” he said.

Later Friday, Abe discussed issues such as Britain’s planned exit from the European Union in a meeting with Juncker, an outgoing commission president who is set to be succeeded by Ursula von der Leyen, a former German defense minister, on Nov. 1.

The Japanese leader was on a two-day visit to Brussels after attending the U.N. General Assembly in New York.