“If the conditions are right, it is possible for us to show a common understanding,” Kong said in a wide-ranging interview here in Tokyo that covered trade, the Hong Kong protests and North Korea.

The first state visit to Japan by a Chinese president in 12 years will have a profound effect on Sino-Japanese relations, Kong said.

Xi’s trip will reciprocate a visit to China last year by Japanese Prime Minister Shinzo Abe and come amid a rapprochement between Asia’s two largest economies, whose postwar ties have sometimes frayed over historical grievances.

A proposed fifth document would lay the foundation for future relations between the countries, Kong said. The ambassador stressed that China and Japan will “need to foster an awareness of being partners,” rather than rivals, to strengthen cooperation in a new era.

The ambassador said the timing of Xi’s visit to Japan still needs to be worked out but added that the Chinese side hopes Xi can come when the cherry blossoms are in full bloom. In Tokyo, the cherry blossoms usually reach their peak between the end of March and the beginning of April. 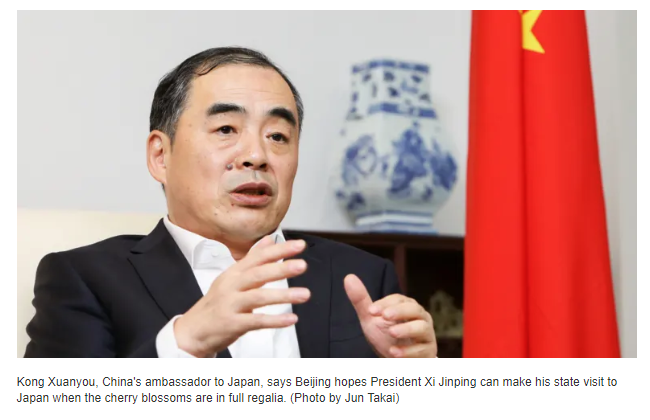 On the escalating U.S.-China trade war, Kong said “both countries profit from cooperation but suffer from fighting,” he said. He added that “the Japanese economy cannot escape the impact of the trade war,” given how closely it is intertwined with China’s economy and trade.

Kong slammed the U.S. for blacklisting China’s Huawei Technologies and urging its allies to freeze out telecommunication equipment made by the company over national security concerns. These moves are “discriminatory,” the ambassador said.

Huawei “will contribute to Japanese society as a responsible company,” he said. “I hope that the Japanese government will guarantee its ability to conduct business as usual.”

Kong also expressed an interest in a trilateral free trade agreement with Japan and South Korea to combat the rise of protectionism. “This is a very important framework for strengthening our economic relationship,” he said. “We will accelerate discussions to lay the groundwork for future development.”

But he said he was concerned by growing tensions over Japan’s restrictions on semiconductor-related exports to South Korea, and said China will help the countries reach a swift resolution.

Regarding the Regional Comprehensive Economic Partnership, a trade pact currently under negotiation by 16 members including Japan, China and India, “there is no change to our goal of finalizing it by the end of the year,” he said.

The Chinese ambassador also touched on the ongoing protests in Hong Kong. He stressed that since its handover from the U.K. in 1997, Hong Kong has prospered under the “one country, two systems” framework that allows the city a high level of autonomy.

“The goal is to restore social order as quickly as possible,” he said, calling for a direct dialogue between Hong Kong’s government and people.

On North Korea, Kong said that the U.S. and Japan have not yet achieved an appropriate level of trust with Pyongyang.

“I welcome and support efforts to resolve the issue through dialogue,” he said regarding Abe’s desire to meet North Korean leader Kim Jong Un without preconditions.