TOKYO — Japan’s ruling party will propose tax breaks to encourage businesses to channel their record stashes of cash into mergers and acquisitions that fuel new thinking and businesses.

This trend is a major reason for Japanese enterprises’ low return on equity compared with American peers, he said.

Amari has in mind a tax credit to encourage them to invest retained earnings in new businesses. LDP policymakers also seek to incentivize investments in other companies and startups that offer technologies and business models not developed in-house. 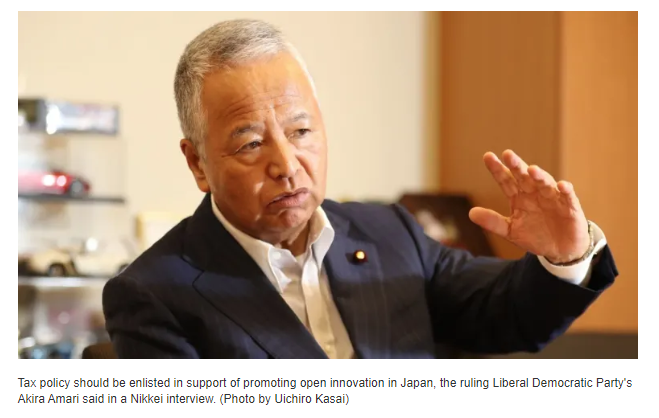 The idea is “for big companies lacking in innovative spirit to grow with new vigor, like second-time startups,” he said.

“Both the budget and the tax code need to be brought to bear on raising productivity,” Amari also said.

The proposals will be included in the outline for tax reforms for the fiscal year starting next April. The LDP’s tax research commission, chaired by Amari, will soon debate the size of the tax credit and the scope of applicable investments.

One aim of the plan is to support open innovation in corporate Japan, which has long favored closely guarded in-house research. “Large companies throughout the world are acting boldly,” he said, and “there is no reason Japanese corporations can’t do the same.”

What Japanese companies have lacked in investment they have made up for in share repurchases. Buybacks are on pace to top 10 trillion yen for the first time in the fiscal year ending next March. 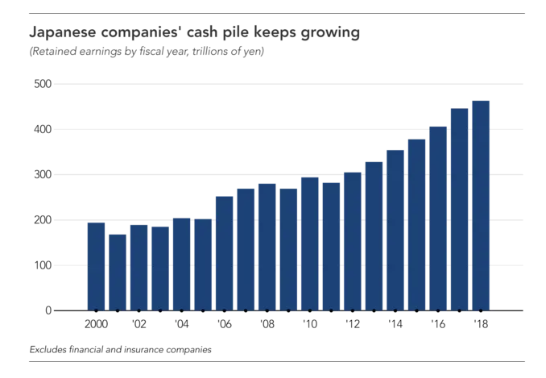 Existing tax incentives mainly target investments that depreciate over time, such as productivity-raising equipment and software.

There are no tax incentives in place now for investment in startups, although some were rolled out in the past.

Last fiscal year, the government passed a tax break for employers that raise workers’ pay 3% on an annual basis. The government also expanded tax deductions for research and development costs, as well as for joint research expenses. But retained earnings still climbed to a new record.

Amari touched on the consumption tax, which will go up to 10% from 8% for most products starting Tuesday. “What we need to pay attention to is minimizing the negative effect on the economy,” he said.

The LDP tax chief said the government has taken steps to ease the shock of the tax hike, such as exempting certain food items, based on the experience of the 2014 increase.

At the same time, “the fiscal stimulus and the tax structure can’t be temporary,” Amari said.

“It can’t be a one-time giveaway,” he said. “The investments and tax system must facilitate growth.”