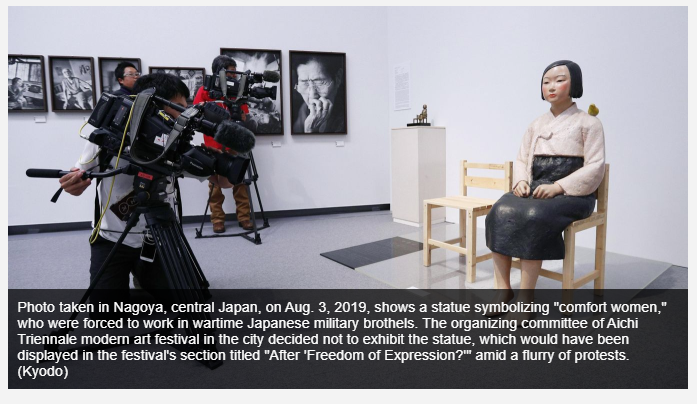 NAGOYA — Organizers of an art exhibition featuring a statue symbolizing “comfort women” that had been shut down and the host of the art festival containing it in Nagoya, central Japan, agreed Monday to reopen the exhibit in a high-profile case involving the freedom of expression.

The two sides plan to reopen the exhibit at the Aichi Triennale 2019 sometime between Oct. 6 and 8, and the statue and other works that had been on display before the shutdown will continue to be shown until the festival ends on Oct. 14, according to Aichi Gov. Hideaki Omura.

The agreement came after the two sides reached a settlement in the case during a hearing at the Nagoya District Court on a demand that the exhibit “After ‘Freedom of Expression?'” be reopened.

They include cooperating with security measures and implementing an advanced reservation system using numbered tickets.

The works in the exhibit prior to the shutdown will continue to be shown, while an educational program will be implemented where appropriate, Omura said.

The exhibit will also provide visitors with an interim report on the background up to its discontinuation, according to the governor.

The exhibit showcased works previously not shown due to what critics call censorship, which also included a piece on Japan’s imperial system.

It was closed three days after the Aug. 1 opening over security concerns due to multiple threats to the festival.

However, others — including the organizing committee and some artists who had their work included in the exhibit — have argued the move was an act of censorship, rather than one of safety.

Speaking to reporters, Omura said the two sides will immediately start consultations about the resumption of the exhibit.

“We’d like to promote consultations with sincerity, since we have only two weeks left” before the end of the festival, the governor said.

Upon hearing news of the exhibit’s reopening, Nagoya Mayor Takashi Kawamura, however, criticized the agreement.

“It’s outrageous to showcase political works in an art festival hosted by the city (and other public entities), an act that would amount to a hijacking of public opinions,” he told reporters.

Kawamura previously incited controversy when he demanded the exhibition be shut, arguing the statue should not be displayed at a publicly funded event as its presence could give the wrong impression that Japan accepted South Korea’s claim the women were forcibly taken by the Japanese military.

The Agency for Cultural Affairs also withdrew a grant for the art festival worth approximately 78 million yen ($722,000) last week citing inadequacies in the procedure, saying the Aichi government failed to provide necessary information when applying for the subsidy.

Education minister Koichi Hagiuda told the press at the time that the decision “did not amount to censorship” and was not made because of the presence of the comfort women statue.

“The decision was based on improper conduct during the application procedure for the grant,” Chief Cabinet Secretary Yoshihide Suga also said during a press conference Friday. “It had nothing to do with the exhibition’s content.”

The “comfort women” issue has been a major sticking point in Japan-South Korea relations, which have recently sunk to the lowest point in years due to disputes over wartime history and tighter export controls.