FOCUS: Japan, China may boost ties over next decade, depending on U.S. 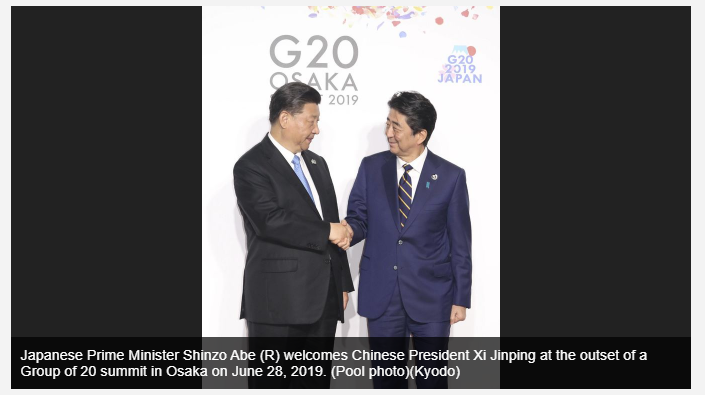 BEIJING — Japan and China, despite engaging in rivalry over the past decade, may bolster ties over the coming one, as the United States, pursuing its own interests, will likely stick to policies that could work to the detriment of Asia’s two powers.

Whoever the president is, Washington would continue urging communist Beijing to rectify its business practices that prevent U.S. firms from entering China’s enormous market, while trying to curb its alleged militarization and expansionism, pundits say.

Also, Tokyo could be forced to consider how much it will accept Washington’s requests on issues such as tariffs and financial support for U.S. military bases in Japan, with the United States apparently losing its global and regional leadership role, they add.

“Japan-China relations over the coming decade would be defined by their respective relations with the United States,” a European diplomat in Beijing said, adding, “Given the current U.S. status, China and Japan are expected to move to deepen their ties.”

On Tuesday, the People’s Republic of China, led by the Communist Party, marked the 70th anniversary of its founding, at a time when relations with the United States have been sharply deteriorating due largely to a tit-for-tat trade war, waged by President Donald Trump.

Since 2009 through late 2017, ties between Tokyo and Beijing were frayed by a territorial row in the East China Sea, and Japanese Prime Minister Shinzo Abe, who took office in December 2012, made every effort to boost its alliance with the U.S. administration.

Sino-Japanese tensions escalated after the Japanese government of Prime Minister Yoshihiko Noda, Abe’s predecessor, decided in September 2012 to bring the Senkaku Islands under state control. The tiny, uninhabited islands — called Diaoyu in China — are controlled by Japan but claimed by Beijing.

On the economic front, China has overtaken Japan as the world’s second-biggest economy since 2010, sparking fears in Washington and Tokyo that Beijing may pursue hegemony and seek expansion in the global arena on the back of its ample financial resources.

Relations between the two countries, however, have improved recently, as worsening ties with the United States have prompted China — whose economy has been under intense downward pressure amid the trade war — to forge economic cooperation with Japan.

Tokyo, meanwhile, has been also targeted by Washington over various issues including the U.S. huge trade deficit with Japan and Trump’s eagerness to make Japan shoulder more of the expenses for the U.S. military presence and operations in the Asian nation.

Although Abe has worked hard to build a personal rapport with Trump, who was elected as president in November 2016, there are “many problems that cannot be resolved just because the relationship between the leaders is good,” a Japanese government official said.

Moreover, amid mounting concern that the U.S. global clout will fade, even if Trump is not re-elected in 2020, the next president will not necessarily give up policies based on “national particularism,” which would “not benefit Japan,” the official said.

Under such circumstances, it would be natural for Japan to look for better ties with its giant neighbor China for regional economic prosperity and security, some foreign affairs experts say.

“Japan might find it to maintain open channels and communication with China, and sustain a healthy trading relationship with Beijing in case U.S.-Japan relations run into difficulties,” said Victor Teo, an assistant professor at the University of Hong Kong.

It would be necessary for Japan to “strive to adopt a more even-keeled relationship with China over the course of the next five to 10 years,” said the scholar, who belongs to the Department of Japanese Studies at the university.

Other analysts say that the ongoing trade battle between Washington and Beijing — the world’s No. 1 and No. 2 economies — would ironically help make China more influential worldwide, as the United States has also been negatively impacted by the trade dispute.

“If the liberal international order is weakened and nationalism is ascending, China would be in a relatively stronger position because of its size and still relatively faster growth rates,” said Ming Wan, a professor at George Mason University in Virginia.

“If the United States continues to pull back from global leadership, China’s influence would increase by default,” the Chinese expert on Asia-Pacific affairs added.

A source familiar with Tokyo’s thinking acknowledged that within the next decade, the time may come when Japan will try to develop security and economic ties with China — already the country’s largest trading partner — more closely than with the United States.

“Of course, Japan’s alliance with the United States will remain the cornerstone of the nation’s diplomacy and security,” the source said.

“But to be honest, there are Japanese officials who believe that Japan and the United States will be engaged in differences in opinion in the near future, which would make the regional situation more fragile,” the source said.

“For economic and security stability in the Asia-Pacific region, they think it is one option that Japan will get closer to China,” he added.

Yet some other specialists on Sino-Japanese relations have rejected such a view, saying sensitive bilateral issues have not been resolved at all and ties would become strained if one of them rises up to the surface again.

In addition to their territorial beef, Tokyo and Beijing have been at odds over Beijing’s tough approach to Hong Kong and Taiwan. It is also uncertain how the souring of Japan-South Korea relations will affect regional security, the specialists say.