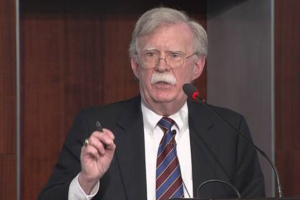 NHK took up a speech on North Korea delivered by former National Security Advisor Bolton at the Center for Strategic and International Studies on Monday. He reportedly emphasized that the DPRK will never give up its nuclear programs and has recently refrained from conducting nuclear tests or launching long-range ballistic missiles since it has already “finished testing.” While stopping short of criticizing President Trump’s conciliatory approach toward the Kim regime, Bolton appeared to differ from his former boss as he was shown saying: “The more time that goes by almost inevitably benefits the proliferant.” Bolton also reportedly commented on the growing schism between Japan and South Korea by saying it is wrong for Washington to ignore the dispute between its two allies. Kyodo News filed a similar report.