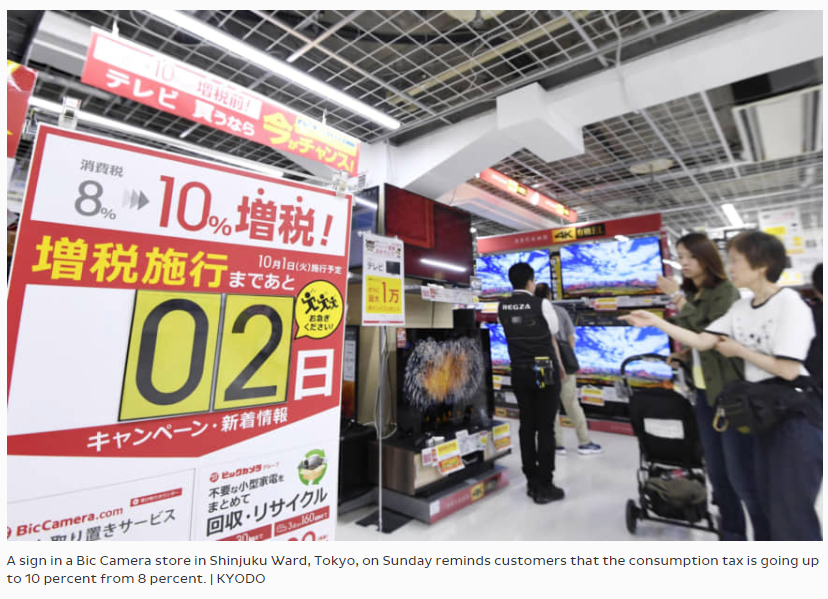 BY KAZUAKI NAGATA AND SATOSHI SUGIYAMA

After twice being postponed by the administration of Prime Minister Shinzo Abe, the consumption tax on Tuesday will rise to 10 percent from 8 percent, with the government maintaining that the increased burden on consumers is essential to boost social welfare programs and reduce the swelling national debt.

The move remains unpopular among the public, and now attention turns to how it will affect the already wobbly economy.

In tandem with the tax hike, a variety of measures meant to cushion its impact will be implemented Tuesday, including rewards programs for cashless payments, a free preschool education initiative, and reduced levies for food and nonalcoholic beverages.

The government, hoping to avoid a repeat of the economic hit following the previous tax hike in 2014, is hoping to prop up consumption with the big-spending programs.

Some economists predict that the array of measures will absorb the impact to some extent. But they also caution that consumption will take a hit amid weakening consumer sentiment, which in turn could stunt broader economic growth.

“Raising the consumption tax will naturally impose a burden on households. … There are various views on whether the impact will be quite light or somewhat deep, like what happened in 2014,” said Shinichiro Kobayashi, an economist at Mitsubishi UFJ Research and Consulting Co.

When the government raised the consumption tax to 8 percent from 5 percent in April 2014, the first jump in 17 years, the economy was dealt a serious blow, with GDP contracting two quarters in a row between April to September that year. The damage was enough for Abe to delay a planned increase to 10 percent in 2015.

Kobayashi predicts that the increase this time will affect consumption for the immediate October-December quarter, but “the drop will be relatively mild and won’t last until the beginning of next year.”

The 2 percentage point boost is estimated to inflict about a ¥5.7 trillion burden on households. However, making preschool education free of charge, keeping the 8 percent rate for food and nonalcoholic beverages and beefing up social welfare are expected to lessen that burden to around ¥2 trillion — about a quarter of the ¥8 trillion cost of the 2014 hike, according to the government and the Bank of Japan.

Kobayashi pointed to other factors that could limit the damage this time around. Compared with 2014, the nation has a lower unemployment rate, higher incomes and more overall workers, he said.

Some economists aren’t as optimistic about the outlook.

Takayasu Kudo and Izumi Devalier of Merrill Lynch Japan said in their July report that consumer confidence “is likely to stay weak after the tax hike, resulting in a sluggish household spending recovery.”

Kobayashi also sounded a warning about other risks, as the economy has grown dependent on domestic factors — primarily consumption and capital spending — amid slumping exports due to the intensifying U.S.-China trade war.

Although overall income has increased, Kobayashi noted that consumer confidence has been weak and remains worse than in 2014.

According to the Cabinet Office, the consumer sentiment index fell 0.7 point to 37.1 in August from the previous month, the 11th straight month of decline. In March 2014, the figure was at 37.5.

What precisely is holding the index down is not clear, but confidence is especially weak among older generations, Kobayashi said, adding that the current economic situation is more favorable for younger people.

For instance, due to a tighter job market in recent years, young people can find employment more easily and companies are more willing to pay higher salaries to secure talent.

Because some of the relief measures for the tax hike, such as the free preschool program, are primarily designed to benefit young people, the higher tax may hit older generations harder than expected, Kobayashi said.

A report released in September by Daiwa Institute of Research estimated that the benefit from the free preschool program could outweigh the effects of the tax increase on households of two or more people aged 49 or younger who have one or more children aged 3 to 5, while older or single households will shoulder more. The report also warned that while the ¥2 trillion burden from the tax increase is indeed smaller than that from the 2014 hike, consumption will see a moderate dip until next fiscal year.

Yasunari Ueno, chief market economist at Mizuho Securities, forecasts that the tax hike will lead to a downturn in the economy and that the various government measures to offset the burden will have limited effect.

The tax increase brings the rate to two digits, prompting consumers — particularly senior citizens and those who depend on pensions — to tighten their wallets, he said.

The cashless reward points programs, he added, will only be valid for nine months and will be limited to younger generations since the elderly in general aren’t likely to embrace technology-heavy options.

“We really can’t expect too much (from the programs),” he said. “Rather, my view is harsh that their effects aren’t that substantial.”