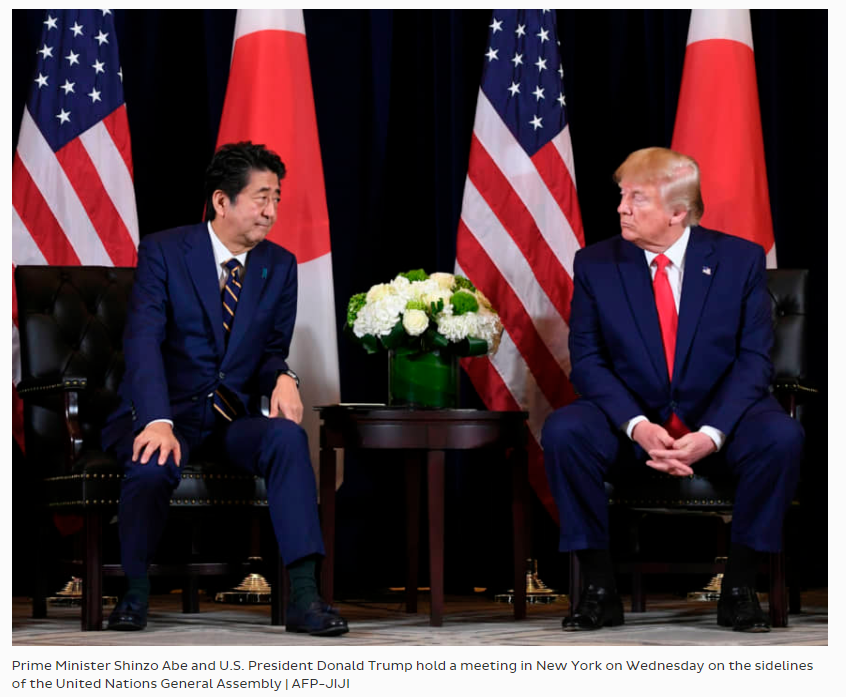 Prime Minister Shinzo Abe hailed the Japan-U.S. agreement on goods trade — the talks on which he wrapped up with U.S. President Donald Trump and inked a joint statement in New York on Sept. 25 — as a “win-win” deal that benefits all the people of the two countries. However, the agreement is nothing short of a scheme to help Trump win farmers’ votes in the U.S. Midwest and get re-elected next year. Indeed, the deal represents a loss for the people of both countries.

In a U.S. presidential race, the results of most states are largely known even before the vote, For example, California will vote for a Democrat candidate and Texas will go to the Republicans. What determines the race is the outcome in the 10 or so swing states, and many swing states such as Pennsylvania, Ohio, Michigan, Iowa are located in the Midwest.

Trump won the 2016 election by claiming that the U.S. was losing jobs because of unfair trade practices and won the support of steel and auto industry workers in the Midwest’s Rust Belt.

The Midwest is also home to the farming regions known as the Corn Belt. The president obviously hates to have farmers, traditionally Republican supporters, vote for Democrat candidates.

The Corn Belt is the base of U.S. soybean and corn production, which are primarily used for livestock feed. However, soybean prices plummeted after China, the world’s largest soybean importer, hiked its tariff on American soybeans in a tit-for-tat exchange of punitive tariffs in its trade war with the U.S.

In addition, the Comprehensive and Progressive Agreement for Trans-Pacific Partnership and the economic partnership agreement between Japan and the European Union have reduced Japan’s tariffs on beef and pork imports from countries such as Australia, Canada and Denmark to levels lower than the tariffs on U.S. products. If the livestock industry is damaged by the tariff gap, Midwest farmers that supply soybeans and corn for feed will be hit even harder.

The problem would be resolved if the U.S. returned to the Trans-Pacific Partnership. But for Trump, who pulled the U.S. out of the TPP in 2017, the only choice was to hold bilateral free trade negotiations with Japan. Japan did not need an FTA with the U.S. because it was able to export its automobiles to the U.S., just as before. However, Japan agreed to enter the FTA talks with the U.S. because it overreacted to the Trump administration’s threat of imposing additional tariffs on Japanese vehicles on “national security” grounds under Section 232 of the Trade Expansion Act.

I do not believe that the U.S. would have imposed additional tariffs on auto imports. The Trump administration also raised tariffs on steel and aluminum on national security grounds, but the story was entirely different for steel, which is only used as an industrial material, and automobiles, which are bought by Americans as consumer goods. The decision on auto tariffs was to be made last May — well over two years after Trump’s inauguration — but the U.S. president postponed the decision by 180 more days. To avert tariffs on its auto exports, the European Union initially agreed to hold trade talks with the U.S., but such negotiations have yet to begin.

In the Japan-U.S. talks, Abe fully responded to the call for measures to placate the Midwest farmers by agreeing to cut beef and pork tariffs to the level accorded to CPTPP members. On top of that, he promised to buy surplus corn from the U.S. The government claims to have successfully averted setting low-tariff import quotas for rice and dairy products such as butter.

The U.S., however, has no export competitiveness in butter, and does not even use up the current non-tariff quota on rice. It has used only 24 percent of the quota in fiscal 2018.

California, which exports rice to Japan, is a state where the Democrats are sure to win, and currying favor with farmers there will not aid Trump’s re-election prospect.

The fate of the 2.5 percent tariff on car imports, which the U.S. had promised in the TPP talks to eliminate, was left to future negotiations. But any decision to eliminate the car tariff would likely not be made until after the 2020 election. A 2.5 percent tariff may appear small, but Japan’s car exports to the U.S. are mostly high-grade vehicles such as Toyota’s Lexus, and the tariff burden amounts to $1 billion each year. Abe even tried to curry Trump’s favor by highlighting Japanese automakers’ plans to build new plants in the U.S. — yet another measure aimed at U.S. Midwest voters.

A comprehensive free trade agreement that also covers service trade, investments, intellectual property and so on will require approval by the Congress and will possibly not be in time for the presidential election. Japan agreed to a free trade agreement limited to goods, which will not need congressional approval. Trump has characterized the new agreement as the first phase and expressed hopes for concluding a final, comprehensive agreement in the near future. In the next phase of the talks, Japan can no longer use its card on farm product tariffs so it will likely be pushed around by the U.S.

The TPP comprehensively dealt with the very issues over which the U.S. is pressing China in the bitter trade war — such as banning forced technology transfers, intellectual property protection and regulation of state-owned enterprises. If the U.S. had returned to the TPP instead of reaching a bilateral deal with Japan, that would have added pressure on China to join the TPP, which would have brought benefits to the global economy as a whole.

But since the U.S. managed to resolve its disadvantage in Japan’s agricultural market, it will have no incentive to return to the TPP. In short, the bilateral trade agreement was a victory for Trump, but a loss for the U.S. Concluding a bilateral trade deal also runs counter to Abe’s claim of strengthening the multilateral free trade system.

The Abe administration has sacrificed so much to cooperate with the re-election of Trump, who is likely the most scandal-tainted president in U.S. history. In the 1980s, Prime Minister Yasuhiro Nakasone and U.S. President Ronald Reagan built a close personal rapport. But the Japan-U.S. talks on beef and citrus fruit trade took 10 years to conclude — beyond the period when the two leaders were concurrently in office. If the next U.S. president is a Democrat, how then will the U.S. view Japan? The next U.S. president may not consider the Japan-U.S. relationship to be the most important bilateral relationship in the world.

Kazuhito Yamashita is research director of Canon Institute for Global Studies and a senior fellow of the Research Institute of Economy, Trade and industry.