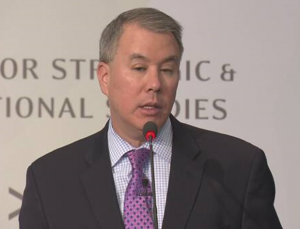 NHK reported on a speech given at a Washington think tank on Monday by DOD Under Secretary for Policy John Rood. He reportedly urged South Korea to revisit its decision to rescind its GSOMIA with Japan. He underscored the importance of the U.S., Japan, and South Korea maintaining trilateral “integrity” on the security front irrespective of differences between Tokyo and Seoul in order to deal with regional challenges such as North Korea and China. Regarding the possibility of the U.S. deploying medium-range ballistic missiles in Asia, U/S Rood reportedly explained that there are not yet any specific plans for the deployment of the missiles, which he said are still under development.