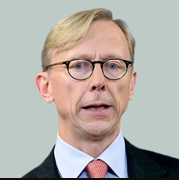 NEW YORK – U.S. Special Representative for Iran Brian Hook gave an interview to the Asahi Shimbun on Sept. 26 in New York. Mr. Hook is in charge of Iran affairs at the U.S. State Department. Asked about the possibility of a summit between U.S. President Donald Trump and Iranian President Hassan Rouhani, Hook emphasized that Mr. Trump has no plan to ease sanctions to have a meeting. “The President has repeatedly made clear his willingness for dialogue, but he will not pay a price for a meeting,” said Hook. As for [U.S.] requests of Japan, Hook said “to specify Iran by name for its aggression and hold it accountable for the act of terrorism.”

The possibility of a meeting between President Trump and President Rouhani in New York on the sidelines of the United Nations General Assembly was the focus of attention, but it did not materialize in the end. According to Mr. Hook, there was absolutely no contact between the two leaders at the UN General Assembly.

Asked why a meeting did not take place, Hook touched on French President Emmanuel Macron’s efforts to broker a meeting. “There is no question that he [Macron] endeavored to arrange a meeting,” said Mr. Hook. “You should ask France why Iran did not sit down at the table. Or I suggest you ask Iran. This is a question that should be directed to them, not to the U.S. Our position has been clear for the past two and a half years.”

One factor behind the escalation of tensions between the U.S. and Iran is the attack on oil facilities in Saudi Arabia in mid-September. The U.S. has declared that “Iran carried out the attack.” During the UN General Assembly, the leaders of the United Kingdom, Germany, and France issued a statement saying that “Iran bears responsibility [for the attack].”

Hook said, “I believe that silence will only invite further aggression by Iran. Iran is no different than the neighborhood mafia. If its neighbors gather together and put pressure on it, its behavior will change.” He continued: “More than keeping silent, many countries’ naming Iran [as the perpetrator of the attack] will lead to the easing of tensions.” As for [U.S.] requests of Japan, Mr. Hook said “to specify Iran by name as the aggressor and hold it accountable for the act of terrorism.”

Regarding the maritime security initiative, Mr. Hook said, “The Initiative is significant because it will monitor the skies and seas and issue a warning before Iran attacks other countries’ vessels.” “If more countries participate, it will be that much more effective,” he continued. The maritime security initiative is a “coalition of the willing” led by the U.S. to secure the safety of vessels in the Strait of Hormuz and nearby waters in the Middle East. “It [The Initiative] has already started, as I see it,” he said. Hook said that two or three countries in Europe or other continents have agreed to participate in addition to the five countries that have already announced their participation, including the UK, Australia, and Saudi Arabia.

As for the U.S.’s expectations of Japan in relation to the coalition of the willing, Hook pointed out that “(Iran’s) Supreme Leader Ayatollah Ali Khamenei rejected the peaceful diplomacy” extended by Prime Minister Shinzo Abe during his visit to Iran in June when he met with President Rouhani and the Supreme Leader. Moreover, Iran “attacked a Japanese oil tanker,” Mr. Hook continued. “It is critical that all countries hold Iran accountable and restore deterrence so that these kinds of acts do not happen again.”