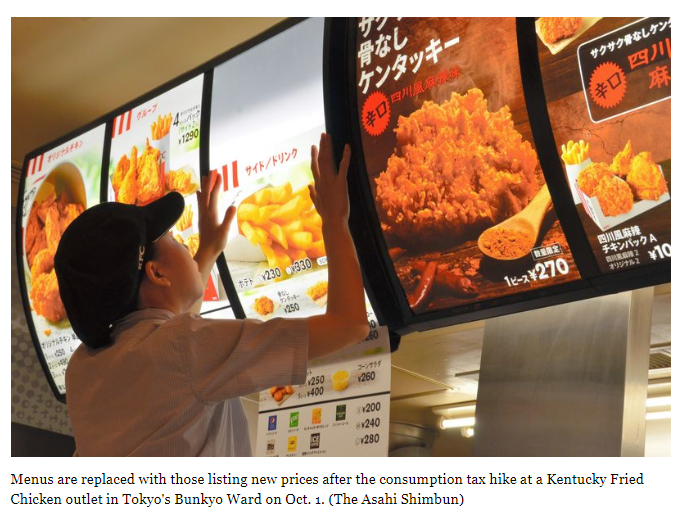 The first consumption tax hike in five and a half years pushed up the levy on the sales of goods and services to 10 percent on Oct. 1.

The latest sales tax increase was originally scheduled for October 2015, but Prime Minister Shinzo Abe has twice postponed the hike.

The government has put together a package of measures to cushion the impact of the measure worth 2 trillion yen ($18.48 billion) in total, more than the expected additional tax revenue, as it has tried to prevent the 2-point rise in the tax rate from hurting the economy as the top policy priority.

ORIGINAL PURPOSE OF THE TAX HIKE

One component of the package is a nine-month program to provide an incentive for cashless payments for purchases by offering a special return in reward points.The program will basically give shoppers reward points worth 5 percent of their payments–more than the tax increase–if the purchases are made with credit cards or smart cards at small and midsize retail stores and 2 percent for those at outlets operated by retail chains such as convenience stores.

The government’s efforts to soften the economic effects of the higher consumption tax are driven by bitter memories of how the past hikes battered the economy. As a result, it has not done enough to consider the aims of the measures or assess their effectiveness.

The government has also rethought the way the fresh tax receipts are used and decided to earmark part of the money to finance the proposal to make day-care and kindergarten services free.

The government has stressed the benefits of these measures for consumers while taking a step that imposes a fresh financial burden on taxpayers.

Meanwhile, Abe has barely talked about why the consumption tax hike is needed in the first place.

The consumption tax is a revenue source that is supposed to be used to fund the public pension, health and nursing care and child-care programs.

These social security programs are, in principle, financed by insurance premiums and tax revenues while the revenue shortage is covered by government bonds, or debt.

The principal original purpose of this tax increase is to reduce, as much as possible, the government’s borrowing to pay for these welfare benefits, which means shifting the burden to future generations.

Abe, however, has decided to use only half of the additional tax receipts for this purpose to provide greater policy support to people in the workforce.

The ratio of people aged 65 or older has climbed to nearly 30 percent of the population from the slightly above 10 percent three decades ago, when the consumption tax was introduced.

The ratio will rise further to almost 40 percent three decades from now, when children of baby boomers will be all aged 75 or older.

Accordingly, social security spending has swollen to 123.7 trillion yen from 45 trillion yen 30 years ago. The welfare expenditures will grow further as the number of elderly people who need health and nursing care increases.

Meanwhile, the ratio of nation’s overall workforce to the total population has fallen to 60 percent from 70 percent three decades ago and will decline to 50 percent 30 years down the road.

With both the working population and the number of taxpayers decreasing, this nation’s social security system, which supports all members of society, cannot be sustained for long if it remains dependent on low-cost government borrowing thanks to extremely low interest rates.

It is vital to enhance the mutual support function of the system by securing a balance between benefits and burdens over the long term.

At the same time, it is necessary to estimate the economic growth needed to avoid further increases in the tax burden. If there is no prospect of avoiding an increased taxpayer burden, it is necessary to figure out what kind of system will best secure funds to keep the system running.

The 10-percent consumption tax is projected to bring more than 20 trillion yen in revenues to state coffers in the next fiscal year, which starts in April 2020, offering a leading revenue source rivaling the income tax.

But the consumption tax, by nature, is a regressive tax taking a larger percentage of income from low-income earners than their higher-income peers.

The government has decided to keep the tax rate for food and newspaper subscriptions unchanged at 8 percent, adopting the first such reduced rate for certain goods, as a step to ease the regressive effect of the tax.

Because it is a stable revenue source less susceptible to economic conditions, the consumption tax is crucial for the financial sustainability of public services, especially surging social security benefits.

But the government should also pay serious attention to the viewpoint of redistribution, or consideration to people without big paychecks or assets, in dealing with consumption tax issues.

Japan is facing tough challenges posed not just by the aging and shrinking of its population but also by growing economic disparities.

The nation will not be able to do without reforms to bolster the ability of taxes to promote the redistribution of income, such as raising the income and inheritance taxes.

National debate should be initiated swiftly on the future vision of the social security and tax systems suitable for the new age.

When the ruling Liberal Democratic Party decided to introduce the consumption tax 30 years ago, then LDP Secretary-General Shintaro Abe, the prime minister’s late father, touted it as “a tax that will be able to meet the financial challenges of the new age of a graying population.”

Then Prime Minister Noboru Takashita said, “I’m confident that the day will come when people recognize the benefits of introducing the new tax.”

Their remarks reflected expectations that the consumption tax would also get retired consumers involved, through their spending, in the broad sharing of the burden of financing the social security system.

But the levy, which imposes a highly visible tax load on all consumers, has triggered a broad backlash among the taxpaying public.

Politicians tend to avoid talking about any tax hike despite the dire state of the state finances out of fear of antagonizing voters.

Prime Minister Abe has made a taboo of discussing another tax hike by claiming there will be “no need of another consumption tax increase for the next 10 years or so.”

But he should remember that the rise in the consumption tax rate to 10 percent was a first step to boosting the government’s financial health under a compromise deal struck seven years ago between the then opposition coalition of the LDP and Komeito and the administration led by the then Democratic Party of Japan.

At that time, the parties discussed the issue from the viewpoint of the future of social security and were willing to offer explanations about the need of the step to win public support.

There are deep public concerns about the future of social security.

That puts the responsibility on both the ruling and opposition parties to promote fiscal reforms through well-thought-out debate on various combinations of options concerning benefits and burdens to garner broad public support.

Japan needs a viable future vision to build a society based on mutual support across generations.

There is no room for putting a taboo on serious conversations on further tax hikes even if the consumption tax rate has finally been raised to 10 percent.

Both the graying of society and the shrinking number of children will continue without stopping.