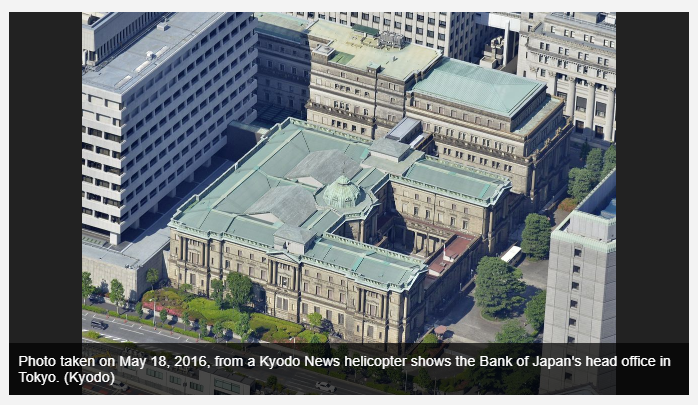 It also showed that sentiment at these manufacturers is expected to deteriorate again over the next three months, further clouding prospects for the economy amid concerns that the consumption tax hike introduced the same day may hit domestic demand.

The key index measuring confidence among major companies in the manufacturing sector such as automobile and electronics makers dropped to 5 from 7 in June, also on the back of a slowdown in the global economy.

The result was the weakest since June 2013 when it logged 4 but was stronger than the average market forecast of 1 in a Kyodo News poll. The index dropped for the third consecutive quarter for the first time since September last year.

The headline reading is forecast to drop to 2 for the next survey in December, according to the central bank.

The index for large nonmanufacturers including the service sector stood at 21, down from 23 in the June survey but above the market consensus of 20.

The index for big nonmanufacturers is forecast to slide to 15 in coming months amid worries over possible weak consumer spending due to the consumption tax hike to 10 percent from 8 percent.

“Many manufacturers such as iron and steel producers as well as shipbuilders said the continued U.S-China trade conflict and a slowdown in overseas economies weighed on their business,” a BOJ official said at a press conference.

Sentiment among iron and steel product makers fell to 7 in September from 10 in June and that of shipbuilding and heavy machinery makers declined to 0 from 7 in the previous quarter.

Among big manufacturers, the oil and coal product makers posted the biggest drop with the index for the sector falling to minus 18 — the lowest level — from 12, while nonferrous metal product manufacturers also marked the lowest reading of minus 18, down from 0 in the June survey.

Both sectors dropped due to a plunge in prices of commodities such as crude oil, copper and zinc due partly to weak demand in the slowing global economy but demand is expected to improve over the next three months after commodity prices recently rebounded, the BOJ official said.

The Tankan survey came out on the same day as the government raised the consumption tax — the first increase in five years — to cover swelling social security costs despite concern the higher tax could dent consumption at home.

The Tankan outcome could add pressure on the central bank to consider additional monetary easing to prop up the world’s third biggest economy, which has been also threatened by the U.S.-China trade conflict, the unclear outlook for the impact of Britain’s exit from the European Union and tensions in the Middle East.

The BOJ has said it will discuss whether to expand its stimulus measures at the next policy meeting in late October to help attain its 2 percent inflation target.

The result may not have direct impact on the central bank’s decision on its next move, said Takeshi Minami, chief economist at the Norinchukin Research Institute.

“But the BOJ will continue to seek a chance for further monetary easing at its October or December meeting while closely monitoring the effects of the consumption tax hike on the economy,” he added.

Large companies — those with capital stock of more than 1 billion yen ($9 million) — in manufacturing and nonmanufacturing said they plan to raise capital spending by 6.6 percent in the current fiscal year to March 2020, compared with a 7.3 percent increase in the previous Tankan.

Large manufacturers expected an exchange rate of 108.85 to the U.S. dollar for the second fiscal half to March, against the 109.34 yen in the June survey.