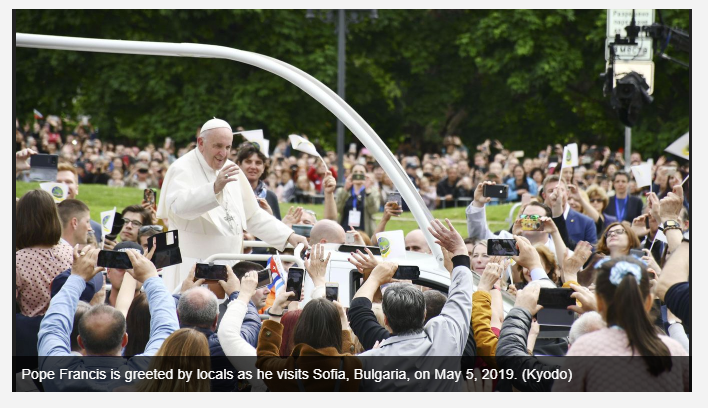 ROME — Pope Francis will call on the world to abolish nuclear weapons when he makes speeches in Hiroshima and Nagasaki next month, the Vatican said Wednesday.

He will also visit Tokyo, meeting survivors of the earthquake and tsunami that devastated northeastern Japan in March 2011. The trip, from Nov. 23 to 26, will mark the first visit to Japan by a pontiff in 38 years.

“I feel deeply impressed and have much respect for Japan when I read the story of the martyrs, and the experiences of the victims of Hiroshima and Nagasaki,” Pope Francis told a group of Japanese journalists, according to Vatican News.

The pope said he admires the casualties who were able to rise again after “that infernal trial,” describing the atomic bombings that ended World War II as “monstrous.”

“So now I want to reiterate a truth: using atomic energy to make war is immoral.”

The pope plans to light the “Lamp of Peace,” which will be brought from the Vatican, at the Nagasaki Peace Park and the Hiroshima Peace Memorial Park, according to a Japanese government official.

He will visit both cities on Nov. 24 and meet atomic-bomb survivors.

On Aug. 6, 1945, a U.S. bomber dropped a uranium-core atomic bomb named “Little Boy” on Hiroshima, in western Japan, killing an estimated 140,000 people by the end of that year.

Three days later in Nagasaki, the United States used a plutonium-core atomic bomb known as “Fat Man,” which led to the deaths of an estimated 74,000 people.

In Nagasaki, Pope Francis will also visit Nishizaka Park — where a monument stands to commemorate the 26 Christians executed in the late 16th century in anti-Christian campaigns led by the warlord Toyotomi Hideyoshi — and hold mass in a baseball stadium.

He will meet quake-disaster victims in Tokyo on Nov. 25, followed by Emperor Naruhito and Prime Minister Shinzo Abe, the Vatican said. On the same day, a large-scale mass will be held at Tokyo Dome.

The pope will leave Japan on Nov. 26 after visiting Sophia University, a Jesuit school based on the teachings of Christianity and the Catholic spirit.

He will become the second pope to visit Japan after John Paul II, who also visited Hiroshima and Nagasaki, in 1981.

With about 1.3 billion Catholics worldwide, the Roman Catholic Church is the largest Christian church. Christianity in Japan, however, is relatively minor compared with Buddhism.

Prior to Japan, the pope will visit Thailand from Nov. 20.